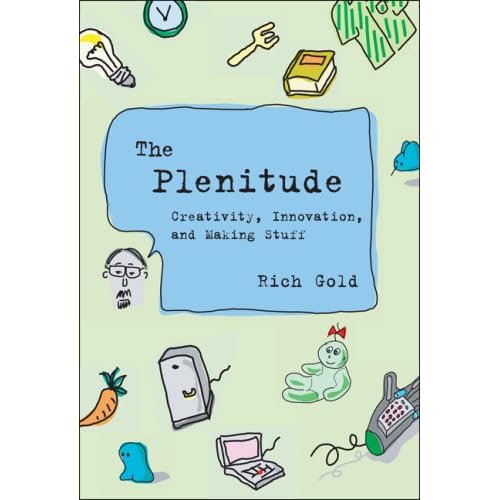 I came across Rich Gold‘s name when I decided to take proper stock of this ubiquitous computing thing maybe three or four years ago. Rich Gold, who I never knew personally, relished in being multi-discplinary, it appears. He describes the multiple hats he wore — engineer, (“pseudo”) scientist, artist, designer. It’s this sort of boarder crossing that I found most intriguing about his approach to work. He describes these hats as distinct, but ultimately I think the collapse in a way that offers unique perspectives on his creative endeavors.

A colleague mentioned his work a few years ago, and then I was surprised to find little available, until I read his bio and found out he died relatively young. I quickly found a PDF of "The Plenitude" and was glad to find a proper book edition of the same work from the new Simplicity series by John Maeda and MIT Press.

I finished the book on the flight back from Amsterdam and was a little disappointed. The beginning was a great set up for what I thought would be remarks on innovation, creativity and design — perhaps a bit on design theory as it relates to the tension between traditional creativity and culture-makers and the demands of consumer capitalism to create new “stuff” (the “plenitude” of things that we accumulate.) I found less there to feed my brain in this regard. It left me wanting a bit more — and then I realized that about half of the material that was in the PDF has been edited out it seems. The whole section in the PDF on Evocative Knowledge Objects (“EKOs”) is gone — I can’t find it in the book. That material, in my mind, are the more provocative insights to be offered. The descriptions of “the plenitude” as a suckers mediation of experiences is a little embarrassing at worst, and dated at best. In light of more nuanced theories of production, consumption and the circulation of culture, Gold’s remarks on us and our relationship to our stuff is a bit conservative and, well..kind of wrong. Suggesting that there is a simple relationships between us, the people who sell us stuff, and the way they mediate between our experiences as if it were a simple two-way relationship just doesn’t hold water. For example, playing baseball in the backyard versus being sold tickets to watch it at a park, or paying to subscribe to television to watch it at home, or paying for video game cartridges to play a video game of playing baseball doesn’t capture the nuance of the situation between fans, heroes, and the cultural-industrial complex that brokers the relationships amongst them. It’s curious to me that the book doesn’t contain the interesting auto-biographical material that describes Gold’s experiences and that lead to various insights on the relationship between design, technology and everyday life. Particularly his material on EKOs as kinds of “theory objects” would have been nice to disseminate in print.

2 thoughts on “Travel Reading — "The Plenitude"”