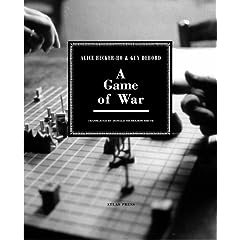 Alex Galloway came by to do a short talk discussing his new game “Kriegspiel” based on Guy Debord’s “The Game of War” This is a curious strategy game that Debord created while in the midst of a bit of a creative flat-spin. It was created in an artisinal mode, with 5 hand crafted editions constructed with a collaborator. Evidently one of the sets — made with metal pieces — was recently on display in NYC on loan from Debord’s widow. Galloway has some interesting archival style insights into the historical context of the game’s development and Debord as a cultural figure of some importance, and I recommend finding whatever he has written on the topic. (It seemed as though he was reading from working-notes for a longer bit of work on this.)

What I find most interesting in this context is the articulation that Galloway has performed between historical archival work and the expression of these “findings” through this game. The game is, by Galloway’s own description, based entirely on the original rules of Debord’s game design. Alex describes himself as fascinated by games, but not at all a game designer. Thus, finding a cultural hero of academics and scholars world-wide who also happens to have designed a game makes for an excellent scholarly project. It skirts the boundary between an activity some critical scholars might poo-poo (game design) and an activity the most conservative scholars could at least chomp on (a proper archival inquiry into the life, history and ideology of a curious figure of some importance.)

Once (and quite a bit “still”) a critical scholar might excavate material from “the archives” (dusty library basements, personal notes moldering in a widow’s attic, interviews with aging contemporaries of the subject, etc.) and then construct a series of insights and anecdotes based on those findings, find a publisher and then stitch together a book on the matter. What Galloway is doing is expressing these insights and anecdotes into a hybrid expression of his findings — a digital, networked game as well as more traditional scholarly essays on the topic. This is significant and important for all the reasons I state over and over here. It’s no longer a viable means for scholarly inquiry to create and circulate ideas and culture solely through dusty old forms like ink on paper. This is a hybrid forms that express both a theory (in this case, Debord’s projection of what strategy is in a rhizomatic, networked era, even though it was constructed many decades before the internet) as well as providing a point-of-entry for someone who has never had a reason to look into this Guy Debord character. For that, Alex’s work is super important.

Parenthetically, I first met Alex back around 2000 when he was doing a residency at Eyebeam (an art-technology center in New York City) while I was preparing to do my residency there. He was working on Carnivore, another important “theory object” instance. I learned a lot about what it was to construct engineering objects that wore culture on their sleeves quite noticeably. It was then that I started understanding how this important hyphenated form called art-technology could offer an opportunity to create and learn about ways to create technological instruments that were more properly and obviously “culture.” Whereas that is always the case — that technology is not outside of culture — it is often hard to find frameworks and communities and mechanisms that allow one to experiment with the mixture. The goals therein are to understand that technology, as culture, is “made” and not “given.” As such, it can be done “otherwise” and need not be the mass-manufactured, extant forms we have today. It can be hand-made properly, even hand-made and massively multiple, but with new entirely preposterous forms that create new ways of seeing, understanding and being in the world.

Alex alluded to some legal hassles with creating the game — a cease-and-desist notice from Dubord’s widow. Liz Losh describes this further in her post on Kriegspiel that she wrote after Alex visited UC Irvine the day after he was at USC.

Unfortunately, as Galloway explained to the audience, he had recently received a lawyer’s letter regarding possible infringement of the rightful owner’s intellectual property. Despite Galloway’s insistence that an “idea for a game” or its “rules” are “not subject to copyright,” those pursuing cease-and-desist orders against the makers of the Scrabulous application for Facebook might disagree.

This point is intriguing for me, particularly in the context of, broadly “fair use” in an academic context. I see this game, generously, as a kind of analytic conversation and engagement with the material. Taking the instructions of the game and creating an “object” that is the game, but in this different, networked, screen-based instantiation is seen by the widow and her lawyers as not at all like writing a paper-and-words-based essay, which is what academics more traditionally do. Here are instances where analytic engagement and the materialization of Alex’s insights and thoughts crosses some boundary into the realm of “unfair” use.

Some parenthetical notes. As I mentioned, Alex and the R-S-G make their own theory objects, as I would call them. Here, with Kriegspiel, they’re using the Java Monkey Engine. — "A 3D game engine written in and for Java. Many features including collisions, particle systems, shaders, terrain system, renderer abstraction."

Ian Bogost has some remarks on Kriegspiel as well.