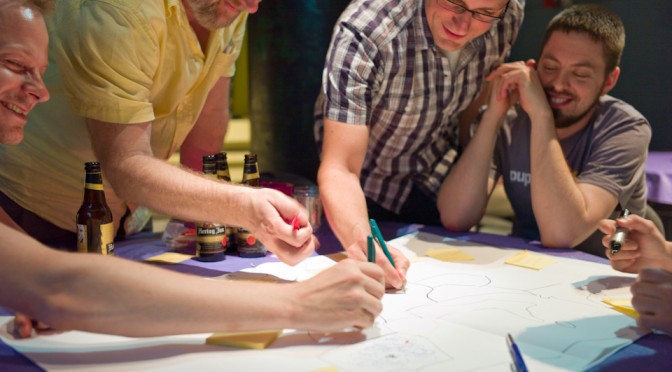 Last week I was at V2_ in Rotterdam to participate in the event “Blowup: The Era of Objects”. It was a brief visit — too brief, of course — but well worth the time to help facilitate this workshop along with Alexandra Deschamps-Sonsino, Anab Jain and curated by Michelle Kasprzak.

There was an EPUB produced for the event containing short essays by Bruce Sterling, Ilona Gaynor, Anab, Alex, myself and others in this: The Era of Objects

The event started with Alex, Anab and myself giving a rapid-fire presentation to lay out some of our own perspectives and work on the theme of “speculative design” — which is an area of design akin to design fiction.

Parenthetically I think it would be worth spending a little bit of time excavating some of the distinctions and contrasts between these various ways of doing design — speculative design, design fiction, critical design — if only to be more specific and open a dialogue about the utility and techniques of these ways of seeing the world a bit differently in order to create new perspectives, principles, points-of-view and the resultant outcomes.

The presentations were short — 20 slides I think was the requirement, done almost pecha kucha style with automatic slide changing after about 30 seconds a slide, so I think we violated pecha kucha trademark rules.

In any case, I cobbled together a perspective on speculative design/design fiction that blurred the boundaries between the two, but also got me started thinking about how the two are distinct.

To start, I outlined three perspectives on what the future is and how it is useful as a way of thinking about what come to be. This is crucial insofar as it’s super important to think from a slightly different angle on what could come to pass. The future isn’t always bigger, brighter, better, better battery life or taller, &c.

To reinforce this I shared several of my “graphs of the future” — some crude hand drawings I made that show various ways in which the future is depicted — linear, logarithmic, a three-dimensional “spread”, a bumpy road of hype curves, &c. This helps reinforce this idea that the future is a point-of-view, which is crafted and created by humans based on a set of ideologies — not in a mean, evil way, but just plainly for the sake of framing what is understood as possible or desirable. Oftentimes though these sorts of points-of-view embedded in graphs are ideological in the sense that they are taken as “law” handed down from somewhere. They’re just points-of-view, like politics and therefore entirely flexible and free to be altered, subverted, re-interpreted and re-graphed.

I then presented what I consider three principles for speculating while designing with fiction:

1) It’s okay to let the imagination wonder — science, technology, design, fact and fiction are all knotted up anyway. By this I mean that once you are working in the broad territory of design, one should not be concerned about steering away from the austere pragmatics of “reality” — one should vector to-and-fro into weird, unexpected territory and flex the realm of what is considered possible. At the same time, be prepared to find that small components of the larger design problem are what one is really after — not so much space-age, fantastical luggage for the future but, in fact — just adding wheels to luggage may be the most significant outcome of getting a “future of luggage” design brief.

2) Realize that stories (and storytelling) are more significant than specifications, feature sets and engineering. As an engineer, this is hard to say, but I believe it more and more every time I’m forced to communicate. The list of sucks. The story, where you can take someone along a path and communicate to them in a way that is engaging and compelling — even if ultimately the base-level of what you are saying is a set of features and the engineering involved — is *much better than just saying what the features are. Show the experience of the design concept in a small story/film/animation/comic book. The hard thing is that telling good stories if really, really difficult. It requires practice and failure and refinement and iteration. I mean — there really aren’t that many good story tellers in the world, but it’s worth aspiring to be at least a satisfactory design storyteller. (Also, parenthetically — I’ve grown weary of the mantra that designers are storytellers. Not because I don’t believe it but because I’d rather see evidence of it, even to the point of workshops and curricula and all that. Maybe I’m overlooking something..a few are; most of course make fast-looking tooth brushes and over plastic-y bits and bobs of landfill.)

3) Science fiction/speculation can do things that science fact/pragmatic reality cannot. It’s more robust to speculate than to cordon off.

Then for the remaining few slides I gave some examples of HOW to speculate with design. These are three approaches/techniques/creative idioms..pastiche, re-enactment/re-imagining, making little films.

1) Pastiche is something I’m quite curious about — a way of moving in and out of reality and fiction, such as turning the reality of the Apollo 11 lunar lander into the cornerstone of an imaginary “owner’s manual” — as if normal humans might own Apollo 11 lunar landers and need to service them in their driveways like normal vehicles rather than highly specialized, hand-built space vessels.

2) Re-enactment/re-imagining, in the particular example I offer of the Tom Sachs project/art-piece “Space Program” is a form of pastiche — replaying an event but altering it subtly to explore alternative futures/pasts.

3) Making little films. I find it extremely useful to make small visual stories that capture the essential characteristics of a design idea. Done quickly without too much preciousness is a great way to iterate on a concept. It forces one to work through many of the aspects of a design fiction/speculation that are very easy to overlook in a static sketch or even a discussion. You have to figure out a number of the important albeit subtle aspects of the design problem. It’s a form of design work, definitely — the film is not just the final communication of an idea; it is design work itself..at least it should be.

Finally, I concluded with two WHY statements..Why speculate with design? Why do design fiction? First, to imagine and see the world from a different perspective. And then of course — speculating and fictionalizing things allows one to imagine and see the world from a non-dominant point-of-view..run against the grain..do the unexpected to nudge things into the realm of new possibilities. Like Dick Fosbury or the guy who decided to bolt some wheels onto the bottom of his barely luggable luggage and thereby roll free around the world.

Following our presentations we entered into a bit of a talk-show style discussion and thence onto the workshop itself. We had three “briefs” for a rapid-iteration design session that was only meant to last about 40 minutes total. Very quick, but these are where interesting things happen. Here were the briefs:

1) The Netherlands. Everyone knows the dikes are going to break and the North Sea is going to begin to cover Holland’s land mass. Despite the best efforts of Dutch engineering prowess, there are “preppers” who want to be sure to be prepared. One is Ries Von Doren — a rich guy who has the resources to do what he wants. In this case, he consults with a design agency to create a disaster communications device because he knows the existing infrastructure (cell phones, emergency networks, etc.) are going to fail. How will he and his family stay in touch?

2) China. Aging population. Robots. How will the robots support the needs of the aged when the numbers reach into the many hundreds of millions?

3) The EU. Things really fall apart in a few months. Deutche Bank takes ownership of Greece. Tensions rise. Travel becomes highly restricted so that engineers from one country cannot get into other countries and so conversations and meetings related to setting and evolving technical standards and interoperability are not able to happen. Soon, systems that connect one country to the other fail to work properly — some countries evolve their internets, others are not able to and very quickly the internet fails to cross borders. The network becomes heavily balkanized. What arises out of this sequence of events? How do people communicate across geographical borders?

I made up the Balkanized Internet one so I listened in on that group. It was good fun. The outcomes were varied but I particularly latched onto this idea that existing infrastructures and systems might be used to facilitate communication — and it may in fact not be the visual internet as we are presently used to. For example, the quaint old RF radio would come back into use, with people using voice and perhaps rudimentary modulation to communicate data/text. DIY low-earth orbit satellite, even buoyed by helium/lighter-than-air systems to set up comms networks. Tapping on rail lines to send low-bandwidth morse-code signals across borders. Slow communication over long-wave. Things like this were all very interesting to imagine.

Why do I blog this? Merely to capture a few points on the week I spent mostly traveling with a few hours doing a workshop. Well worth it, though. I also want to think about a schema of these design approaches — speculative, fiction, critical — to help formalize the distinctions in a useful way.