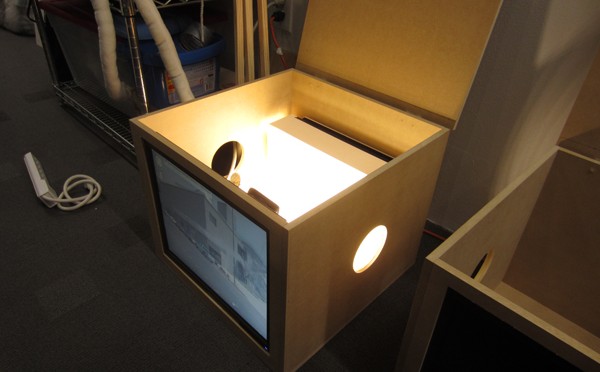 Fabien and Nicolas went to Madrid for a workshop at BBVA innovation about Smart Cities. Organized by Urbanscale (and more specifically by Jeff Kirsh, Adam Greenfield and Leah Meisterlin), it focused on opportunities to use networked data for the client. It basically followed up on the previous work we have done with this bank last year.

The workshop went well, with a combination of short talks, field observations (qualitative and quantitative) and discussions. This workshop was followed by an open session entitled “Beyond Smart Cities” at BBVA’s Innovation Center, with Adam Greenfield, myself (Nicolas) and Kevin Slavin. My slides are on Slideshare. There’s a write-up of the event at the following URL. As described by Kevin on his tumblog, “As surely as it feels like a movement has a name (“Smart Cities”) it also feels like the critique of said movement is collectively more articulate and persuasive. Now the key is to find language to describe what it should be, to go beyond popping the balloon and figuring out what the party really needs.“.

Here in Los Angeles Julian has been hard at work puzzling over an incredibly simple problem of making a little audio device called an Ear Freshener avoid having a power switch and a volume knob. He thinks the solution was intimated by a generous comment poster who told him to slap a couple of transistors in strategic locations in the circuit. So he tried that. It seems to make sense. Hopefully it won’t destroy everything.

Related to this were discussions about the principles behind/between things that make sound — such as sound should just come out of them, rather than be all fussy with settings, configurations and network connections. And that tied into an ongoing thinking thing about latter day considerations about “simplicity”, “one thing done well” and skinny Williamsburg/Brick Lane 23 year olds with full beards who’ve done nothing to deserve a full beard but rock Holgas and fetishize film/vinyl/casette tapes fixed-gear bikes and the like. Thus, we’ve been working on a short essay on the topic of the Cult of the Analog Cult. Or something like that.

Meanwhile, on the East side of L.A. Jayne (with Kickstarter funding in hand) has been getting back to making new Portals. They’re still in the physical draft/sketch phase of things but making the upgrade from end-table-foam-core to mdf feels quite satisfying. The insides are still very rough and she’s still getting started with hooking up the magic/technology bits, but at least now a pair of Portal boxes exist in the world, ready to be filled with interactive goodies.