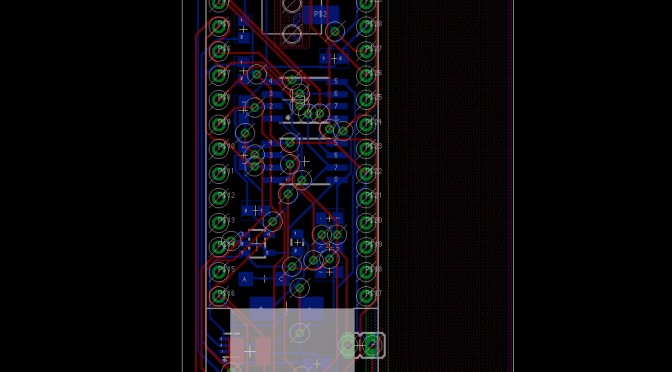 Here’s the current PCB CAD for the Ear Freshener. It’s sorta got two sides, but on the top I basically have a carrier for another board that contains the audio codec device. The components around it are all the brains that control track selection from the potentiometer/knob — that people will think, hopefully, is the volume knob, but actually it isn’t.

The gag/provocation is that knob. It’s an audio thing with a knob..but the knob isn’t an on-off thing. Rather, it’s some kind of semantic intensity knob. You turn it “up” and you get more-of. You turn it “down” and you get less-of.

There’s also a spot to hook up a little button. The button switches the Ear Freshener sound idiom. So you can go through the seasons; or cities; or airports.

((We should figure out a good name for the gag/provocations that we always build into our little devices.))

To do this, I’m probably a little over-engineered, maybe. Maybe not. I use two Atmel Attiny25‘s that basically do the track selection through a data port control on the audio codec. Basically counting in binary, with the track selection one doing the low-order bits and the high-order bits selecting the sound idiom you’ll be freshening your earballs to.

There’s also a bit of circuitry for a step-up regulator. I want to run this off of a single, readily available battery cell — AAA or AA. I’m over USB charging for the time being. At least now. The extra crap you need is a headache. Sorta. I guess I just wanted to get back to that thing where your audio devices take a battery. Not that I want more batteries in the world, but the rechargeable ones? They’re fantastic nowadays. Lots of capacity.

You’ll notice there’s a bunch of nothing on the right. I put that there for mechanical mounting of a battery holder for now. I just didn’t want the battery dangling off in nowheresville. This way I can double-sided sticky tape it to for testing and carrying around.

That’s the deal. I sent off the data to AP Circuits for the first time. It was about $40 with shipping for two boards. The boards are about 2.1in by 2.3in, so sorta small. There was a bit of back and forth to get the data they needed, especially for the board outline. This always ends up being something I leave out — my CAM Processor script doesn’t have that layer built in as output. Need to look into that.

Why do I blog this? I need to keep going on making logs of activity for the various projects that go on here, even if it’s a quick note.