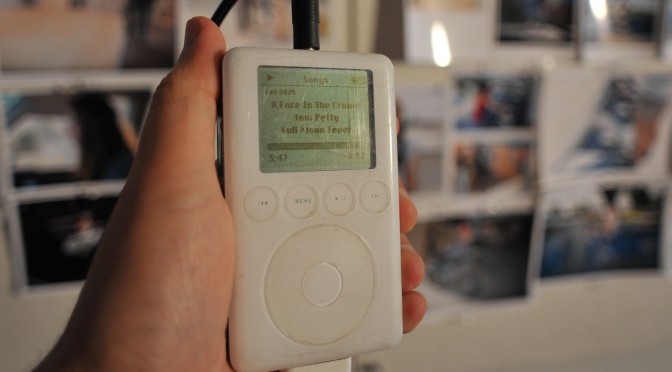 Over the week’s end I was in the back studio tearing down and rebuilding the wall of photos for the Hello, Skater Girl “side” book project. I was tasked with this particular endeavor by the guy I hired to do the book design. I knew I’d have to do it all along which is why I had put up sound board many, many months ago.

It was going to be an all-afternoon-into-the-evening effort, which is fine. Making a book is hard fun work. I needed music but I didn’t want to suffer the tyranny of choosing or even curating a list of things. I just wanted music to come out of the stereo.

And then I remembered — I have my old dear friend’s ancient 2004 iPod. She gave it to me when she upgraded and I’ve never even looked at it. It’s just followed me around from city to city and house to house. There it was.

I plugged it in and it booted up just fine. And then I just pressed play and got to work.

It was a sea of past era music. Not super past — early 2000s. Perfectly fine. Some songs I may not have chosen. Some songs I didn’t know. Whatever. It was somewhat enthralling to realize I was listening to a frozen epoch of sound, incapsulated in this old touch wheel iPod. I sorta wish I had my original iPod. As it is, I still use my 80gb model, although that’s becoming a bit obsolete as a device in this era of having all-the-music-in-the-world-in-the-palm-of-your-cloud-connected-device.

I find it a bit incredible that this thing still works. I mean, it’s a hard drive with a little insect brain — so there aren’t firmware drivers to suffer incompatibilities with a future it was never destined for. Even though it has become obsolete in the consumer electronics meaning of obsolete — it can still work and sound just comes out of it the way an audio device should function.

That’s significant as a principle of audio and sound things, so I’ll say it again sound just comes out of it — and it does. The old trusty 3.5mm jack delivers amplitude modulated signaling in a way that is as dumb as door knobs — and that is as it should be. Not every signal should or needs to be “smart”..just like every refrigerator need not be smart. It’s back to basics for very good reason, I would say. (Parenthetically, I’ve been assaying a fancy new mixed-signal oscilloscope which can take an optional module to specially handle audio signaling — there are audio processing…)

What’s the future of that for the collective of things? How many things will work beyond their time? What are the things that won’t need an epic support system of interfaces, data, connectivity to *just work* after their time in the light? What of the cloud? When it breaks, grows old, has an epic failure that makes us all wonder what the fuck we were thinking to put everything in there — will my music stop coming out of my little boxes?

As I pinned up lots of little photos and every once and again checked the iPod to see what was playing, I thought about some stuff related to the design of audio and design of things that make sound.

iPods and music players generally are great single-purpose devices from the perspective of their being time capsules of what one once listened to. You’ll recall the role the iPod played in the apocalyptic tale “The Book of Eli” — it becomes a retreat to a past life for the the messianic title character. And despite the end of the world (again) the device will still work with a set of headphones the (potentially unfortunate) propriety dock connection and means to charge it through that dock connection. Quite nice for it to show up as a bit of near future design fiction.

What will happen to the list of music, which already seems to be a bit of a throw-back to hit parades and top 100s sorts of thigns. Those are relics from the creaky, anemic, shivering-with-palsy, octogenarian music industry which gave you one way to listen and one thing to listen to — broadcast from the top down through terrestrial radio stations that you could listen to at the cost of suffering through advertisements.

Now music (in particular, lets just focus ont that) comes from all over the place, which is both enthralling and enervating. Where do you find it? Who gets it to you and how? How do you find what you don’t even know is out there? Are there other discovery mechanisms to be discovered? Is this “Genius” thing an algorithmic means of finding new stuff — and who’s in charge of that algorithm? Some sort of Casey Kasem AI bot? Or the near future version of a record play graft scam? Or do we tune by what we like to listen to?

And despite the prodigious amount of music on this flash-frozen iPod from some years ago — now kids are growing up in a world in which many orders of magnitude *more music is available to them just by thinking about it..almost. It’s all out there. Hype Machine, Spotify, Last.fm, Rdio, Soundcloud..in a way YouTube — new music players and browsers like Tomahawk, Clementine — whatever. These new systems, services, MVC apps or whatever you want to call them — they are working under the assumption that all the music that is out there is available to you, either free if you’re feeling pirate-y or for a 1st world category “small fee” if you want to cover your ass (although probably still mug the musicians.) The licensing guys must be the last one’s over the side on this capsizing industry.

Listening rituals must be evolving as well, I’d guess. Doing a photography book about girl skaterboarders means that you end up hanging out with girl skateboarders and you end up observing what and how they listen to music. What I’ve noticed is that they do lots of flipping-through. They’ll listen to the hook and then maybe back it up and play it again. And then find another song. It’s almost excruciating if it weren’t an observation worth holding onto. I wonder — will a corner of music evolve to nothing but hooks? 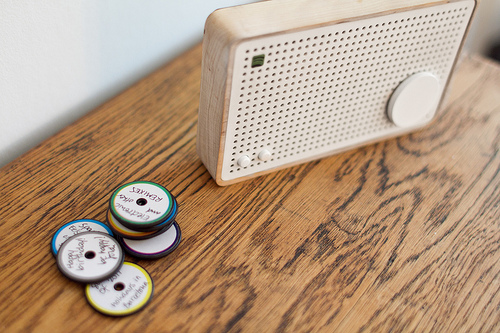 Spotify Box project on IxDA awards thing is interesting to consider. I love the way the box becomes the thing that sound just comes out of. And the interaction ritual of having physical playlists in those little discs is cute. The graduate student puppy love affair with Dieter Rams is sweet in an “aaaahhh..I remember when..” sorta way. It’s a fantastic nod to the traditions and principles of music. And the little discs — well, to complete the picture maybe they should be more evocative of those 45 RPM adapters some of you will remember — and certainly plenty of 23 year old boys with tartan lumber jack flannels and full-beards are discovering somewhere in Williamsburg or Shoreditch or Silver Lake. They’ll love the boo-bee-boo sound track that the project video documentation comes with. Great stuff. Lovely appearance model. For interaction design superlativeness — there’s some good work yet to be done.

It is interesting though to think of the evolution of things that make sound. And I suppose there’s no point here other than an observation that lists are dying. I feel a bit of the tyranny of the cloud’s infinity. If I can listen to *anything and after I’ve retreated to my old era favorites — now what? The discovery mechanisms are exciting to consider and there’s quite a bit of work yet to be done to find the ways to find new music. It definitely used to be a less daunting task — you’d basically check out Rolling Stone or listen to the local college radio. Now? *Pfft. If you’re not an over eager audiophile and have lots of other things to do — you can maybe glance around to see what friends are listening to; you could do the “Artist Radio” thing, which is fine; you could listen to “artist that are like” the one you are listening to. Basically — you can click lots of buttons on a screen. To listen to new music, you can click lots of buttons on screen. And occasionally CTRL RIGHT-CLICK.

Before so, I’d say that clicking on screens and scrolling through linear lists have become physically and mentally exhausting. Just whipping the lovely-and-disruptive-at-the-time track wheel on an old iPod seems positively archaic as names just scrolled by forever. The track wheel changed everything and made the list reasonable as a queue and selection mechanism.

But, can you imagine scrolling through *everything that you can listen to today? What’s the future of the linear list of music? And how do we pick what we play? What are the parametric and algorithmic interaction idioms besides up and down in an alphabetically sorted list of everything?

Good stuff to chew on.

Why do I blog this? Considerations to ponder on the near future evolution of things that make sound and play music in an era in which the scale of what is available has reached the asymptotic point of “everything.” What are the implications for interface and interaction design? What is the future of the playlist? And how can sound things keep making sound even after the IEEE-4095a standard has become obsolete. (Short answer — the 3.5mm plug.)