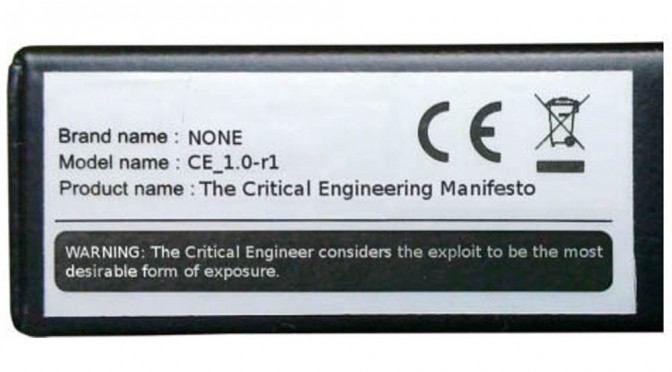 * The Critical Engineer considers any technology depended upon to be both a challenge and a threat. The greater the dependence on a technology the greater the need to study and expose its inner workings, regardless of ownership or legal provision.

* The Critical Engineer raises awareness that with each technological advance our techno-political literacy is challenged.

* The Critical Engineer looks beyond the ‘awe of implementation’ to determine methods of influence and their specific effects.

* The Critical Engineer recognises that each work of engineering engineers its user, proportional to that user’s dependency upon it.

* The Critical Engineer looks to the history of art, architecture, activism, philosophy and invention and finds exemplary works of Critical Engineering. Strategies, ideas and agendas from these disciplines will be adopted, re-purposed and deployed.

* The Critical Engineer notes that written code expands into social and psychological realms, regulating behaviour between people and the machines they interact with. By understanding this, the Critical Engineer seeks to reconstruct user-constraints and social action through means of digital excavation.

* The Critical Engineer considers the exploit to be the most desirable form of exposure.

Came across this Critical Engineering Manifesto by J. Oliver, G. Savičić, D. Vasiliev and available (as Manifestos seemingly must) in eleven languages, just in case anyone may be left out and not know what to do.

A couple of reads through, I want to endear myself to the sensibilities here. I think I am endeared, and maybe a bit anxious by the vagueness of the Manifesto. Maybe more prose or exemplars in material — made things that represent what is to be engineered or how the engineering practice of the critical engineer proceeds.

But, it *is a Manifesto and so therefor more about the spirit and aspiration of turning the instrumentality of engineering into a critical function that can effect change in a larger systemic way — a way larger than the service of Capital and the mindless making of things for the sake of making more things that can be sold, or making more things (platforms) that can sell more things (content.)

The Critical Engineer Manifesto raised more questions than it intended, I think. It’s not actionable. I’m not sure what to do if I want to be a Critical Engineer. Some of it I get — like, engineering is a form of social work; engineers “engineer”, manipulate, provide frames within which people who use engineered things are able to think/operate/behave. That much is clear — and perhaps that’s the start of it. That engineers have an exceptional power to create frameworks of possibility.

The difficult bit to overcome if there is to be any sort of social-political critical mode to engineering is that the sensibility and spirit of engineering is to serve the technology and the instrument and, more often than not — the engineers own sense of what is good, right, correct, suitable, satisfying, best-for-the-user, best-for-me-the-engineer, wizard-y-hack-that-will-make-other-engineers-stand-up-and-nod-knowingly, etc. That’s ingrained. It’s systemic and a cornerstone of the pedagogy of the engineer.

* Why are rich user experiences (whatever those are — I wonder myself) to be suspected?

* Is the ‘awe of implementation’ the ingenious hack? What are those methods of influence that need to be determined?

* Does a Critical Engineer really believe that there is a thing called the ‘user’?

It’ll require more sub-parts, stories, and prose to make this Manifesto more than a statement that has the potential, as all Manifestos do, to enforce its own tyranny.

Another little alarm bell that goes off in my admittedly hard head — it’s quite Academic. I think if you put this in front of one of those guys who is actually in a position to effect material change at Lab126, for example — they’d shrug and wonder “..the fuck?” If you put this out as a little art pamphlet that a few hundred people see at Transmediale or Ars Electronica — you’ll probably win a prize. No one’s going to make more clever, critically engineered, mass-market e-book readers though.

I understand Manifestos to be about effecting material change. Doing so in a world of Consumer Electronics (to extend the CE imagery here, which I think is on purpose) is millions-of times more difficult than in the really teeny-tiny world of one-off clever academic-art-technology-design thesis/research/festival projects.

((I had a meeting a week ago. We’re design-engineering with a twinge of design-fiction-ing a new lovely Consumer Electronic. The number of people who were candidates for the dealio worldwide? About 7 million. Sounds like a lot, dudn’t it? Well — turns out arguing that that is a market for a clever new thing is challenging in the least.))

Art-design-tech will always be critical and marginal. It’s the legacy of institutions at the margins to be critical and to manifest their critical stance in Manifestos. Those institutions and critics and artists and so forth — they are where new ideas are supposed to come from — where change comes about. Research, thought, theorizing, publishing, being independent and being different and thereby always, perpetually stuck in a position where you have to challenge.

Personally — I decided that academia is not the place to affect material change for all sorts of reasons. It may have been in the romantic old political days. Nowadays? It’s as complicit in creating crappy stuff as “them”. The political, economic, legal, property & ownership motivations are nastier than anything in a “normal” Corporation. ((Don’t forget — University is a Corporation, too.))

Why do I blog this? I like the spirit and aspiration here, even if I don’t know how to turn these statements into something I can do to bring about the sort of change in sensibility that I think is at the heart of this here. There’s a practical side to doing engineering and doing design that brings about change. That’s the heart of the Design Fiction ‘movement’. It’s partly critique, but the shortcoming of critique or critical positions is that they often don’t tell you what to do. Nowadays I’m more intrigued by how you can effect change from inside the industrial machines so you have scale and you have influence. I’m not convinced it’s possible, but if you can whisper the right incantations in the ears of people who can sign-off on good new less crappy stuff, there’s an opportunity. I’ve been told, and once recently accidentally overheard — it’s a long shot, doubt it’ll happen. It’s fun to try anyway, and learn along the way.