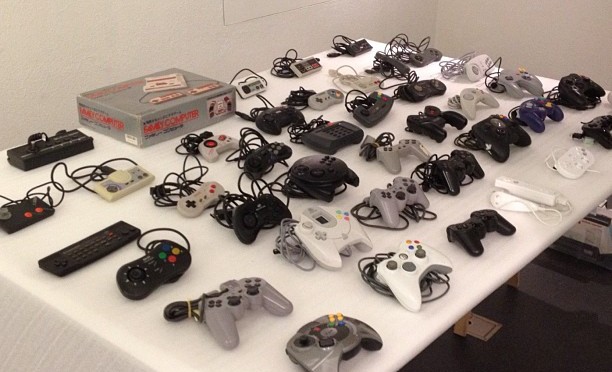 In Switzerland, after an hectic week with Lift12, Nicolas went back to design workshops with students. Last Monday and Tuesday, he gave a course in interaction design at the Geneva University of Arts and Design and supervised the last details of the Urban Games project with Etienne Mineur and Daniel Sciboz. The workshop, which started last fall, is now completed with eight videos that are going to be shown at the Playtime exhibit. They describe different scenarios for location-based games using the city as a game board, we’ll try to show them on this blog as soon as it can be made public. Overall, this workshop was meant to explore different game mechanics at the city level and how to go beyond existing archetypes in this domain.

Also, the very same exhibit will feature the game controller collection and Nicolas and Laurent Bolli had to check the final arrangements for the pads to be shown. The piece will consist in a big cabinet with 42 joypads (41 actually since the Kinect doesn’t have anything) to describe the iterative evolution of game pads over time. This portion of the collection will be part of a section called “Bodies and Minds”:

“game pads have been the traditional interface between the player and the avatar, the thread that entangles both bodies. In recent years, though, both the video game industry and independent artists and researchers have presented new innovative ways to strengthen the role of the body in game interaction. From Nintendo’s Wii and Microsoft’s Kinect to more experimental corporal interfaces that play with notions of control and even pain, the future of game interaction will, no doubt, involve our flesh and skin in unexpected ways.”

At the end of the week, he went to Lugano (the swiss-italian part of Switzerland) for a talk about user research in design and to discuss potential workshops in this interaction design program.

Last week Julian spent a bit of time running the Marshall Stack project, which meant lots of semi-hands-on/semi-hands-off tasks. In the studio a very lovely little film was made to help communicate the project. As these things go, it wound help helping the core DRI’s for the project as well as those who are outside of it or just coming in from the outside and have no clue as to what we were doing. This is one direct area where Design Fiction film serves an extraordinarily useful role — it helps communicate in a way that words and discussions often cannot, or can once someone has seen the experience in a little film. It’s been very useful and well-worth spending about three-quarters of a day to produce. I’m excited about the development pace of Marshall Stack. The distance between the decision to do it, actually starting it formally, and our deadline has been aggressive — especially starting and the goal line. There’s something about the project and the way it is framed and the constraints put upon it to get to the core part of the UX — to focus ruthlessly on that core — that has some lessons to be shared post-launch. As well as some general observations about the nature of working on a rapid development project with a small team, where people sit, and how the collaboration unfolds that I’m looking forward to sharing when we’ve finished this up. I’m deliberately being mindful of the activities within the project and taking lots of notes so as to better produce a story about how you do this sort of advanced designing. I think that the core of the story will be about advancing design and not only the material design things we did along the way. Marshall Stack is one of those projects that has lessons both within and outside of it. By that I mean that it is attempting to advance what an organization does, but do so by doing the advanced, unexpected, weird things — but those things are actually viable things, not just exercises or substitutes for an unknown future-disruptive thing like a Lego brick or the generic stand-in, “the widget.”

Later in the week, I went on a one-day trip to San Diego to scope out some heavy equipment for the model shop — specifically for the electronics bay. We’re looking at Pick-n-Place machines so we can rev-up the rapid in rapid prototyping. (Now, it’s a daunting task to populate boards with SMT components that like to fly away and requires hours and hours of uninterrupted time to accomplish. The hours-and-hours is the operative term and right now I’m the only electronics guy.) A pick-n-place machine could be just the thing to make that job take on the order of tens of minutes rather than many hours/entire days — even for small numbers of multiple boards. (And we got a weird book — doesn’t matter but it’s called “Shatner Rules” — signed by Mr. Shatner himself..a perk of the APEX 2012 Electronics Manufacturing Trade Show!) Now if we can just figure out where this new robot will go in the already crowded shop..

At the end of the week, Julian and Nick (not Nicolas) met in Tempe Arizona outside of Phoenix. We were there to run a workshop on Design Fiction where we aspired to make a few little vignette-y films about the near future of the corner convenience store. This of course was based on the observation that many great innovations over the course of human history find their way into your corner convenience store — fire, aspirin, for example. Our question for the Emerge event was to project that observation into the future when all great things no matter how fancy or expensive originally, wind up with the net present value of 99¢ or 3 for $1.

Up North, Fabien went to San Francisco for a talk at Strata, the O’Reilly conference about big data and “building a data-driven”. He presented several projects conducted by the Laboratory and then took off for Maui for a well-deserved break.