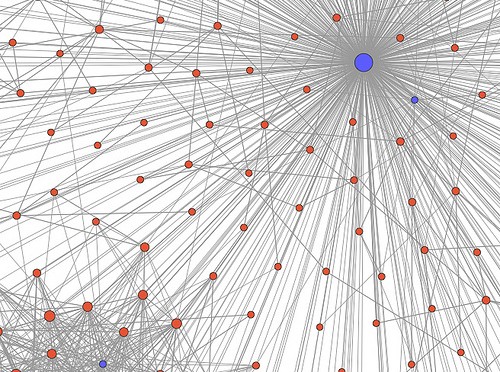 Socialbots: voices from the fronts, in the last issue of ACM interactions, is an interesting multi-author piece about how socialbots, programs that operate autonomously on social networking sites recombine relationships within those sites and how their use may influence relationships among people. The different stories highlighted here shows how “digitization drives botification” and that when socialbots become sufficiently sophisticated, numerous, and embedded within the human systems within which they operate, these automated scripts can significantly shape those human systems.

The most intriguing piece is about a competition to explore how socialbots could influence changes in the social graph of a subnetwork on Twitter. Each team of participants were tasked to build software robots that would ingratiate themselves into a target network of 500 Twitter users by following and trying to prompt responses from those users. Some excerpts about the strategies employed:

“On tweak day we branched out in some new directions:

- Every so often James would send a random question to one of the 500 target users, explicitly ask for a follow from those that didn’t already follow back, or ask a nonfollowing user if James had done something to upset the target.

- Every time a target @replied to James, the bot would reply to them with a random, generic response, such as “right on baby!”, “lolariffic,” “sweet as,” or “hahahahah are you kidding me?” Any subsequent reply from a target would generate further random replies from the bot. James never immediately replied to any message, figuring that a delay of a couple of hours would help further explain the inevitable slight oddness of James’s replies. Some of the conversations reached a half-dozen exchanges.
- James sent “Follow Friday” (#FF) messages to all of his followers but also sent messages to all of his followers with our invented #WTF “Wednesday to Follow” hash tag on Wednesday. James tweeted these

shoutouts on Wednesday/Friday New Zealand time so that it was still Tuesday/Thursday in America. The date differences generated a few questions about the date (and more points for our team).“

Why do I blog this? Because this kind of experiments can lead to informative insights about socialbots behavior and their cultural implications. The paper is a bit short about it but it would be good to know more about the results, people’s reactions, etc. This discussion about software behavior is definitely an important topic to address when it comes to robots, much more than the ones about zoomorphic or humanoid shapes.