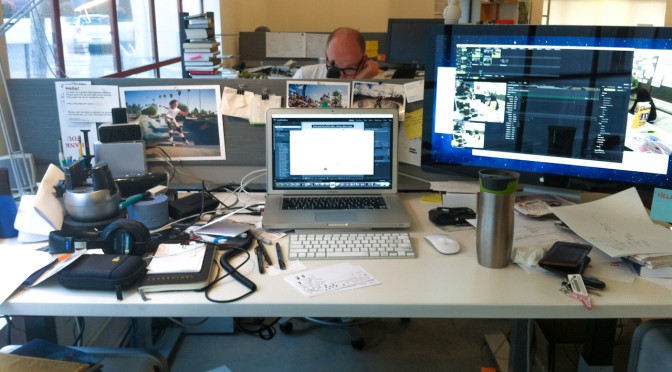 Nicolas was, once again, in the train for two workshops about design ethnography and object repurposing: one in Paris at ENSAD, and another one at the HKB in Bern. The idea was to show students the value of this kind of field investigation by asking them to go observe how people repurpose objects in physical space. Giving the same brief to different students is interesting as it allows comparisons between the results and the different cultures (swiss german versus french). Nicolas also gave a talk about the game controller project at the HKB and animated a visit of the Playtime exhibit. The rest of the week was devoted to writing a research grant about design ethnography and the game controller book!

Fabien returned to his homebase in Barcelona and started plotting follow-up work on our network data initiative. Our engagements will range from strategic advisory and seminars to hands on work on urban data analysis and workshops. He dedicated the rest of the week polishing some key elements of the Quadrigram visual programming language. He teamed-up with interaction designer Tim Stutts to produce a brief 3-minutes video that explain how Quadrigram can reveal different dimension of a single dataset. We used real-time traffic information from our friends at BitCarrier in that demo:

Julian down here in Los Angeles was, huh..what went on last week? Hold on..okay. Looks like mostly Project Audio activities, specifically the Marshall Stack project. Hardware for that was meant to be done at the end of the week, but there were the inevitable delays. Now it looks like it’ll be today, which probably means the end of *this week. *Sigh. Whatever. There are curious lessons in here about rapid development, prototyping “platforms” and the like. That’s good stuff to learn from. But, while waiting (I have to admit to having a day of boredom..) I went back to Ear Freshener and dramatically simplified the PCB by taking all the power boost circuitry and the fancy “turn-on-when-audio-jack-is-plugged-in” circuitry and figured — just get the audio bits working. For the power boost circuitry, I sourced a little boost regulator from which is effectively what I’d put on the board anyway in a subsequent iteration.

The other thing I did was go to Art Center College of Design and talk to almost-graduated Media Design Program grads about “Industry Practices” – basically what I do, how I got to where I got, and why I like it and why I don’t. It was a fun thing to do and the chance to be honest about where I am professionally was cathartic. What else? New Laboratory jackets arrived, so those’ll start going out to the local affiliates; goading more of the staff to contribute to the blog; finishing the photography book; tricking my Nike+ Fuel Band wristband thing to accept my cycling as fitness fuel; the usual.

And late night strategy/vision work, too.

Oh, wait — also there was this fun interview in The Atlantic with the video from Corner Convenience — on Nick’s Vimeo, Corner Convenience has had over 10,000 views, which is cool for a squirrely little Laboratory that only several hundred people check out every week.

[pullquote author=”Christensen, Clayton M. (2012): Disruptive Innovation. In: Soegaard, Mads and Dam, Rikke Friis (eds.). Encyclopedia of Human-Computer Interaction.”]Disruptive innovations, in contrast, don’t attempt to bring better products to established customers in existing markets. Rather, they disrupt and redefine that trajectory by introducing products and services that are not as good as currently available products. But disruptive technologies offer other benefits—typically, they are simpler, more convenient, and less expensive products that appeal to new or less-demanding customers