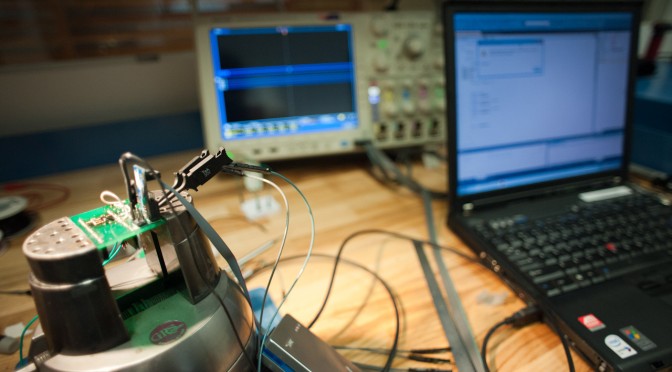 Pfft. Turns out Nicolas is on some island in the Mediterranean “writing” the game controller book.

Well, here in Los Angeles it’s been mostly Project Audio. It was lots of time in the Model Shop, shaking the rafters in the Electronics Bay trying to get the EarFreshener awake and alive. More about the details of that in a subsequent post, but there was a little bit of thinking around: what is the design fiction conceit behind it? is it a prescriptive, medicinal thing? an alternative to the screen-y world, or the thing that helps cure us of screenlock? or some other medical sounding ailment?

And then also some conversations planning for a big design seminar-y getaway event perhaps in the fall. And, also in the meantime, it was a pleasure to host an afternoon with Kevin Slavin in the studio helping reflect upon and check upon some work going on and adding a little creative and conceptual seasoning, in particular to the Tracks project.

In Barcelona, we entered into the final days of work on Quadrigram polishing the list of pre-programmed modules that will be part of the Visual Programming Language. This last effort also consisted in defining the roadmap of periodic release of new modules that will complete the environment along these upcoming weeks.

Also, we are now plotting a follow-up investigation to the Streets of BBVA project. More on that later.

Anything news from SF?