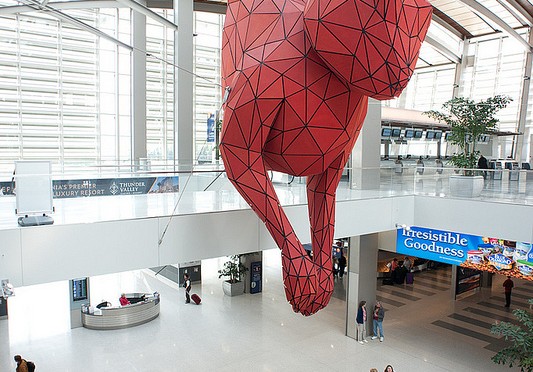 For me in Los Angeles, I spent the week debugging the Ear Freshener project and designing a new circuit board. More about that in a subsequent post. There was general following-alongs on the #NewAesthetic developments — mostly to say that it’d be nice to not over-theorize a thing that is basically a result of living the Algorithmic Life. But, it’s good therapy to say it so, to have some awareness and set of observational tools to document and capture these things, like this weird rabbit I saw in the Sacramento Airport on my way back from the Gaming the Game conference.

And that was the other thing I did last week. Thursday and Friday I was at UC Davis at this conference. It was quite good fun. Unfortunately, I missed Tim Lenoir’s keynote, but I did get to catch Mackenzie Wark talking about the cultural and political implications of the strategic elements of Debord’s Game of War (and Alex Galloway’s controversial digital edition of Game of War). Also, Tad Hirsch was there and mentioned his Trip Wire project, which I first saw at the Zero One conference in 2006. It’s one of my favorite, favorite “art technology” projects. I still think it’s a weak signal for a future of meaningful Objects that Blog (which was consistent with 2006 sensibilities — now, maybe it’s Objects that Tweet or something, such as Superball by Stamen.) It’s also, I was reminded, an audio project in that the coconuts phoned a hotline for noise complaints and then spoke. Embarrassingly, I had never heard the actual audio that was delivered in these phone messages — Tad played them and I now see that they are plainly on the project’s web site.

On the European front, I (Nicolas) spent the last week actually not in Geneva but in South of France for a mix of vacation and heavy writing. It’s good to have finally some time to focus 100% on the game controller book project. More specifically, I spent most the week researching and writing about the early instances of video game controllers that paved the way for the arrival of joypads. Our point is of course not to tell the whole history of video game but since we want to show how looking at the joypad is a good way to understand this culture, it’s important to spend some time on it. And naturally, it lead me to write about switches, knobs, dials, old-school joysticks from the beginning of the 20th Century and oscilloscope. The point is to show the different lineages, how they disappear or recombine over time. This chapter’s almost done. The difficult thing is to be accurate and try not to focus only on facts and observations since we think it’s important to discuss the implications.

Back to Geneva, I spent last Friday teaching in a design school in Annecy (France). A mix of lectures and workshop activities, the idea was to show various foresight-related approaches.

Here in Barcelona, we are approaching the release of version 1.0 of Quadrigram. I completed the list of approx. 350 modules that made the final cut and have started to plan the road map for the release cycle of the application. Arrange all the elements of a programming language is daunting task at times, but I hope people will enjoy the coherence of this first set of modules. They are categorized into five distinct Libraries. Each Library groups modules according to their purpose in developing a solution (e.g. load, manipulate, analyze, convert, filter and visualize your data). We setup a javadoc-style Language Reference web site that documents the structures of all the modules.