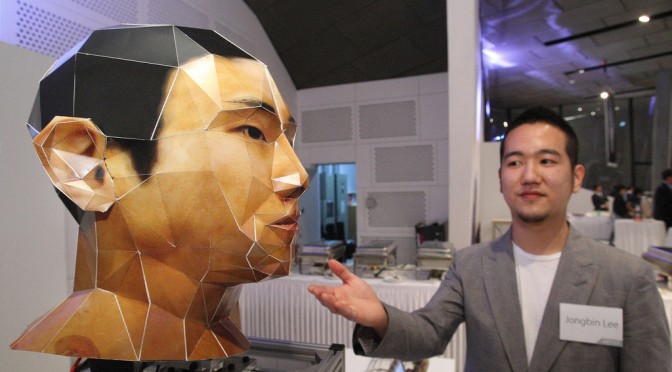 Perhaps the weirdest piece of technology I’ve seen recently is this curious assemblage exhibited at Lift in Seoul: it’s called “Robot Mori” and, as described by Advanced Technology Korea:

“Meet Mori, the alter ego of a lonely boy who wants to go out and make friends but is too shy. Mori, on the other hand, isn’t shy at all. He swivels his head, looking around for nearby faces. Once he detects your face, he takes a picture and uploads it to his Flickr page.“

Why do I blog this? The focus on face, and the visual aesthetic produced by the whole device is strikingly intriguing. Definitely, close to the Uncanny Valley… which made me realize that whatever sits in the valley often belong to the New Aesthetic trope. I personally find it fascinating that robots can have this kind of visual appearance and wonder whether some people might get use to that after a while… in the same sense that they got used to moving circle pads as vacuum cleaners.