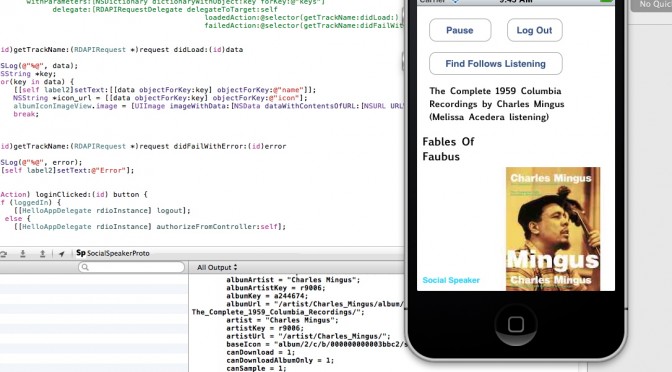 Um. Well, here in Los Angeles it’s been lots of fun/frustrating days getting back into programming the computer. I’ve been getting a bit overwhelmed by the growing list of “ideas” that I thought would be good ways to get back into it. They’re mostly exercises that I thought would be better than following on in the usual lot of slightly mundane book exercises. The one I’m most curious about is a sort of social browser that, like Windows Phone 7’s live tiles, lets me flip through my friends social service “updates” and the like — but do so without having to go to the services, search for my friend, and then see what they’ve done. So — people first, rather than service first. Nothing brilliant there in that, but more a personal preference. Plus, also being able to see stuff from ancient history (many months or even a year ago) along with the latest stuff.

Some folks have mentioned that Path does this in some fashion. I’m still trying to see how. Right now? Path seems as noisy as Twitter. I’m looking for something a bit more — calmer. And the fact that Path is a kind of mobile Facebook status update yammery thing makes me want to enforce a simple rule that limits the number of slots for people. Or puts individuals in a special “Joker’s” slot based on which of your chums are being more yammer-y. Something like this. But, a couple week’s usage of Path leaves me thinking that there’s something that I want that is missing yet still. It’s still everyone. And sometimes you don’t want to share with or hear from everyone.

I also spent a bit of time preparing for a workshop at the Walker Art Center, where the staff is doing some work on the possibilities of speculation and interdisciplinarity for their own internal work. Looking forward to that a bit — especially to try some of the techniques we use in the studio on a group of people who I basically know nothing about.

Oh, that photo? That’s me programming a networking app while flying in an aeroplane. I know it’s not a big deal, but it sorta is for me in a nostalgic sorta way. I think the last time I did that I was heading to the Walker Art Center in, like..2003. Programming in an airplane, that is. Certainly there was no networking going on at the time — but still. It’s sorta nostalgic and fun to get back to that sort of work.

On my side (Nicolas), the beginning of june is packed with different talks in Europe, the organization of a 3-days conference about video-games, preparing the Summer in Los Angeles and the writing of the game controller book… hence the quiet participation to the weeknotes here.