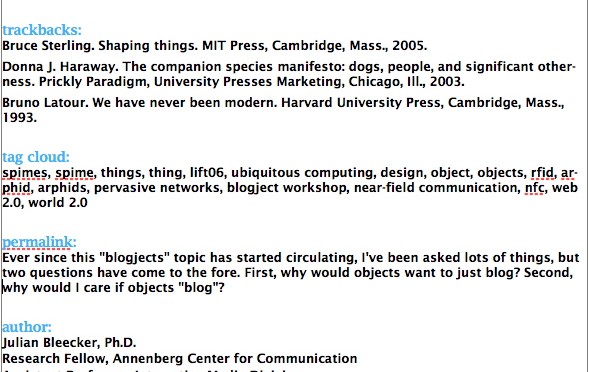 One of my pieces of “output” from the workshop on Blogjects/Networked Things that Nicolas and I put together is the document contained herein. (BTW, we’re very close to having our more formal workshop “write-up” completed.) It started out as some scribblings on what I learned from the workshop, seeing the groups’ projects, and so forth. It then grew into more of a polemic as I recognized what were some consequential stakes â€” why things would matter, or help, if Things were networked? Why would I want a world such as that? And how would I design interactions for such a world?

I didn’t want to lay low and play the engineer who might just geek out on the technology behind networked Things (I do.) I didn’t want to lay low and play the social scientists and just geek out on theorizing or studying how engineers make and how social beings interact in a world of networked Things (I do that, too). I wanted to start by creating a near-future kind of technology fiction about one particular set of design goals for a world in which networks pervades space and social practice and in which networks are co-occupied by slightly differentiated social beings â€” us and Things.

What would I want from such a pervasively networked world? A better bead on what the state of that world is that is impactful. Hence, my stumbling about trying to describe a world of networked Things that aren’t only around to help track packages, but are around to help create a world-wide accessible register of various real-time “feeds” of macro and micro states of the social and ecological environment.

This is not complete and the translation of my ideas to a progression of articulate words sometimes feels like someone who slips on the ice for about 20 minutes and refuses to give up the struggle and just fall down to save themselves the mounting embarassment.

Why Things Matter or A Manifesto for Networked Objects — Cohabiting with Pigeons, Arphids and Aibos in the Internet of Things

Abstract: The Internet of Things has evolved into a nascent conceptual framework for understanding how physical objects, once networked and imbued with informatic capabilities, will occupy space and occupy themselves in a world in which things were once quite passive. This paper describes the Internet of Things as more than a world of RFID tags and networked sensors. Once “Things” are connected to the Internet, they can only but become enrolled as active, worldly participants by knitting together, facilitating and contributing to networks of social exchange and discourse, and rearranging the rules of occupancy and patterns of mobility within the physical world. “Things” in the pervasive Internet, will become first-class citizens with which we will interact and communicate. Things will have to be taken into account as they assume the role of socially relevant actors and strong-willed agents that create social capital and reconfigure the ways in which we live within and move about physical space.
To distinguish the instrumental character of “things” connected to the Internet from “things” participating within the Internet of social networks, I use the neologism “Blogject” — ‘objects that blog.’

13 thoughts on “A Manifesto for Networked Objects — Cohabiting with Pigeons, Arphids and Aibos in the Internet of Things”