(A follow-up to this blogpost, quick notes without the necessary academic framing, for the sake of putting this on the table)

Recently, in different contexts, I've been asked (both by researchers and students) about "my approach" in field research... which feels slightly weird because I wasn't sure I had a definite one. However, given recent projects with the Laboratory, as well as workshops in design schools and talks here and there, it seems there's a common way of doing things. I called it "peripheral ethnography" (or "ethnographie périphérique" in my language) because of my interest in marginal practices, peculiar behaviors, curious rituals, odd appropriation/repurposing of technologies, little things that people talk less about, situations in which technical objects age, things that do not fit, intriguing artifacts ("intriguing to whom?" one might say). All of those could be seen as what futures researchers call weak signals, and that designers might cherish in order to give direction to their work.

The term "peripheral" is relevant here because it means both "relating to or situated on the edge or periphery of something" and "of secondary or minor importance"... which is close to what French sociologist-turned-writer George Perec described as observing what is often overlooked (in "Species of space" back in 1974), what he referred to as the "infra-ordinary".

By saying that I'm interested in peripheral ethnographies, it means that my focus – on any topics I'm looking into – at these little details that seem avoided, weird or overlooked at first glance... as a complement to the diversity of practices (in a very Mauss-ian way). The hypothesis here being that addressing practices and things which be relatively peripheral (and discussing this aspect with informants), and contrasting this to more standard observations, helps to understand cultures "en devenir" (and eventually craft design fiction work).

Or how the observations of mundane technological glitches and frictions offer a complementary form of inspiration to the multitude of glamorous utopian design visions.

At the Near Future Laboratory we are fascinated by the co-evolution of humans and technology, how technology is changing and how it is changing people. Practically, this means we constantly observe this interplay, and we love to question, design and create the future of this relationship. We are persistent stalkers of the partially broken, the tinkered, the seamful, the annoying, the absurd and any other awkward ways technologies surfaces in our modern lives. These observations offer us a complementary form of inspiration to the multitude of glamorous utopian design visions.

In a recent project in the form of the fanzine TUXSAX: the user experience will be as shitty as expected we highlight that perfection, prediction and seamlessness are biased goals for the design of future technologies. They describe an ultimately unattainable and arguably undesirable world.

Our observations are not meant to accuse or mock the institutions or people that are behind all the little digital glitches and frictions that all connected humans must deal with in their daily life. Rather they act as documentation of the state of contemporary technology, how we as a society experience a constantly postponed future, how the promises of tech giants are never really met and more importantly how people deal with the implications: cleaning memories from a bulging cloud storage service, finding out that your USB cable was planned for obsolescence, entering a 16 characters password handwritten on a small piece of paper to access the hotel WiFi, mastering a living room system with 5 different remote controls…

This work echoes with Sliding Friction: The Harmonious Jungle of Contemporary Cities a pamphlet that assembles photos and annotations we took here and there along our dérive through the many cities we lived in and visited. Published 8 years ago but still very contemporary, Sliding Friction was an attempt to showcase the curious aspects of contemporary urban spaces and question the visions of the ‘smart city’. Through 15 topics and 4 themes we focused our lenses on the sparkles generated by the many frictions between ideas, practices and infrastructures that populate cities. 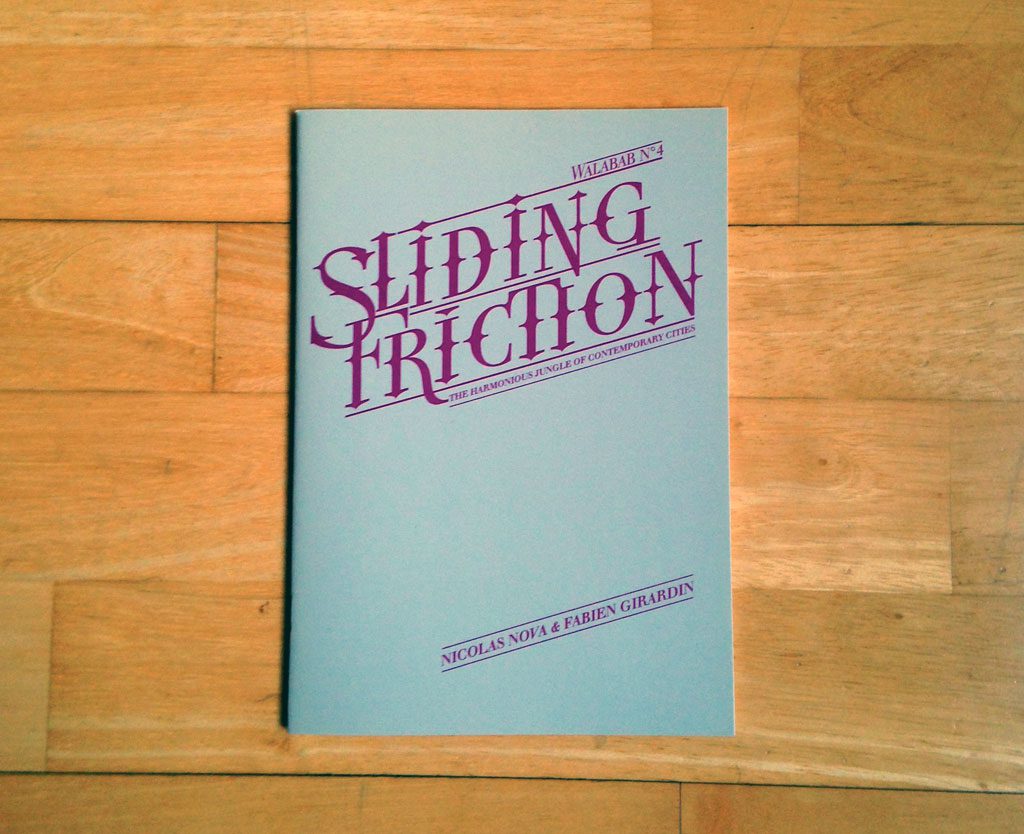 Both TUXSAX and Sliding Frictions, are invitations to engage with the knotty, gnarled edges of technology that say ‘there is humanity here’. We aim to provide some raw food for thoughts to consider the mundane frictions between people and technologies. Do we want to mitigate, or even eliminate these frictions? Or as Julian argues in the postface of Sliding Friction:

Friction is a force exhibited at the point of contact between two objects. As a metaphor, friction is a powerful image describing where life happens. The effect of contact between ideas, practices, infrastructures is seen at the points where that contact squeaks and groans or throws sparks. We operate from the perspective that friction is something that should be mitigated, even eliminated. But friction is absolutely necessary, especially even as a metaphor. Without friction, our shoes would not allow us to walk. Without friction, airplanes and birds would drop from the sky. Without accepting friction and its effects as necessary, we would be fooling ourselves into thinking perfection were the ideal.

Our aspirations should be to embrace the humanity that is imperfection — the humanity that friction echoes. Whether in the imperfection of broken and exposed wires that suggest net- works of communication, the faulty and imperfect WiFi zones that require a very human kind of improvisation or the rewriting of infrastructures with human faces, friction effects are an enduring mark of human and individual action, rather than systemic, technocratic and faceless agency.

Friction is the sinews of the world as we know it. It holds things together even in its messiness. Friction is the rough edge of planned social space and the mark of social activity — it is part of the lived social world where humans live, play, argue and pay taxes. Improvised trash bins in hollow tree stumps, and service personnel trying their best to keep street surfaces clean are evidence of these rough edges. Friction is part of the “real world” — the world of individual action resisting seamless, smooth perfection to inscribe the presence of its occupants. Perfect, planned, frictionless operation is a faulty perception that some hold as the goal for the future city. In my mind, it describes an ultimately unattainable world. I’d much rather see the knotty, gnarled edges as exhibitions that say “there is humanity here.”

As I explained few months ago, I'm working on a follow-up to the "Curious Rituals" project. The project focuses on an anthropological perspective on smartphone usage. It's basically a visual ethnography approach and I recently collaborated with Constance Delamadeleine (from Geneva-base design studio Future Neue) to publish this Print-On-demand booklet that describes a typology of gestures and postures adopted when using smartphones. It can be seen as an intermediary steps between the field research and the writing/crafting of a much more text-based documents... which I'm working on currently.

The book can be found at the following URL.