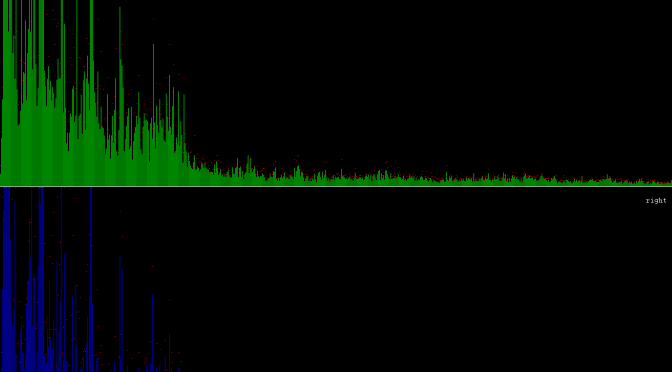 The panel about New Aesthetic at SXSW last month left me with the impression that NA is all about visual representations:

“One of the core themes of the New Aesthetic has been our collaboration with technology, whether that’s bots, digital cameras or satellites (and whether that collaboration is conscious or unconscious), and a useful visual shorthand for that collaboration has been glitchy and pixelated imagery, a way of seeing that seems to reveal a blurring between “the real” and “the digital”, the physical and the virtual, the human and the machine.“

Reading Simon “Retromania” Reynold’s twitter feed the other day, I found this:

At first, I found it interesting, especially considering the follow-up blogpost by Reynolds which was basically a reaction to Bruce Sterling’s essay about NA. In this short post, the author describes what can be the equivalent of NA in the audio department of material culture:

“what seems overtly, blatantly digital in today’s pop — to draw attention to its digital hyper-reality — are all those AutoTune treatments and various other vocal-science effects (stutters, glitches, drastic pitchshifts from high to low) etc that you get routinely in chartpop in recent years– that, and the general sheen of too-perfectness on both vocals (through AutoTune) and on the entire sonic-surface of songs — a digi-gloss – there seems to be an attempt there, semi-unconscious most likely, to make music keep up with the high-definition crispness of flat-screen TV, CGI in film, skin-tone even-ness and other digital touching-up effects as used in glossy magazine photography and (i believe) also in TV and films.“

This all good and well but I think this is the surface of things. As a result (and I do not want to imply that Reynold’s wrong in there, I simply had the same thoughts), my impression is that this way of framing what is NA (regardless of the fact that NA is something *to be framed*) misses the point. As a matter of fact, what I find interesting with the New Aesthetic trope is not a focus on the way things look or sound, it’s way beyond that. As James has put it on his humble tumblr about NA (i wanted to make this assonance for a while): “Since May 2011 I have been collecting material which points towards new ways of seeing the world, an echo of the society, technology, politics and people that co-produce them”.

A good example, in the audio domain for once, of New Aesthetics as I find it interesting is the way the music experience is created, mediated and co-produced on a platform such as Soundcloud. Using it for some time, I am fascinated by the interface the user is provided with:

What strikes me as mesmerizing here, is the use of the spectrogram as the direct interface with musical content: not just an indicator on your screen to see the level of the sound… A machine-produced and machine-readable indicator is used to navigate in the track AND – and this is what I find intriguing – a mean to comment on specific part. Of course, that’s curious IMHO for one reason: the practices that were common on the web (commenting/tagging/starring/linking) have basically circulated to something as common as a playing a musical track and turning it into a social object that people can comment on! What’s next? Permalink for musical excerpt in a track? This example shows another category of NA that I find interesting. Perhaps the upcoming step is to find this kind of spectrogram with comments on concert poster or street graffiti but this is not the point. The main take-away is that the way we use things are changing and the things we are using too because of this co-production that Bridle described in the aforementioned quote.

Why do I blog this? This is maybe half-baked and confusing but I started accumulating material about creolization/recombination/hybridization, and I am curious to see if there a way to tie-in this with the NA meme. My impression is that there’s a hidden variable in there: something that my friend Basile Zimmermann calls the circulation of cultural elements. More to follow later on. And of course, this seems to be related to the object-oriented ontology that Julian blogged about the other day. Let’s read more about that.