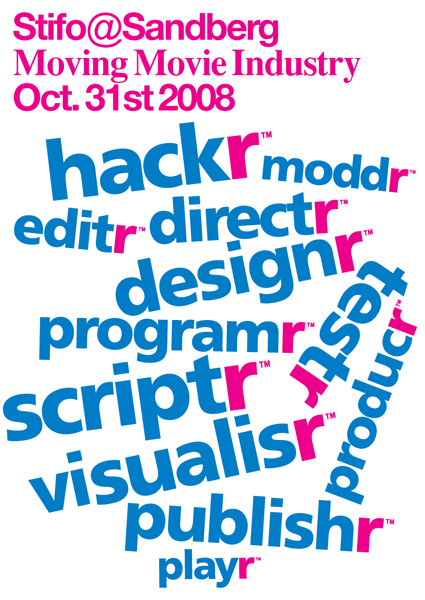 I participated with a talk at this conference called Moving Movie Industry for the Sandberg Institute at the lovely new Amsterdam Central Library was a one day series of lectures related to this notion that the movie industry is “moving” onto some new and interesting territory. There were several very intriguing talks, which you can probably glean from the list below.

The people participating at the conference were some heroes already, and some new people who i finally get to meet face-to-face so I can knot them into my network without feeling like a stalker. For example Geert Lovink the well-known media theorist and activist who just introduced Video Vortex a new publication from the Institute of Network Cultures (available for free) and Ton Roosendaal, who is head of the Blender Foundation and showed some of the amazing films created with free, open-source 3D rendering software. It was also nice to hear from Floris Kaayk, who is the creator of the effective documentary Metalosis Maligna, about what happens when metal implants begin to take over your body. He also showed another documentary called The Order Electrus about an species of insects made entirely of electronics components. It’s a nice piece of Design Fiction, in my mind — an imaginative and visually evocative story about a possible future in a world of discarded industrial wastelands. Anne Helmond gave a funny and insightful talk about people and their relationship to their blogs, with some curious examples of people apologizing to their blog (not the audience who reads, but the blog itself — the software or something.) Bruce Sterling gave a talk about the future and ways we imagine it, which had my rapt attention as it helped me think through some of the early Design Fiction material, particularly on this topic of models by which we schematize possible futures worlds. I also enjoyed the talk by the Guerrilla Games guy Jan-Bart van Beek who talked about some of the production techniques and issues for their visceral, carnal hyper violent Kill Zone game. He showed one video of this Hummer commercial by Joseph Kosinski called “Selector” which used video game visual idioms to present the Hummer — a hideous vehicle for knot-headed buffoons with 8th grade mentality — as if it were a configurable vehicle from a video game. Which is about the only thing that piece of crap should be, ever. If even that. But, this selection along with a few others were intriguing as they were described for the way cinema and video game visual idioms cross back and forth (swap properties) perhaps on their way to establishing new visual languages.

The talk I gave changed from the title I originally submitted, which was to be something more related to real-world-analytics-meets-mobile-contexts, but when I looked more closely at the original conference description, I realize how badly I had misinterpreted the “moving” aspect as “mobile”, and I certainly wasn’t going to talk about movies on mobiles, which I think is pretty much the most uninteresting thing in the world. So, I did the third draft of Design Fiction (after Design Engaged at the beginning of the month, and SHiFT 2008 a week or so ago) which hopefully I’ll finish writing this weekend.

Reservations via conference@sandberg.nl
(obligated due to limited amount of seats)