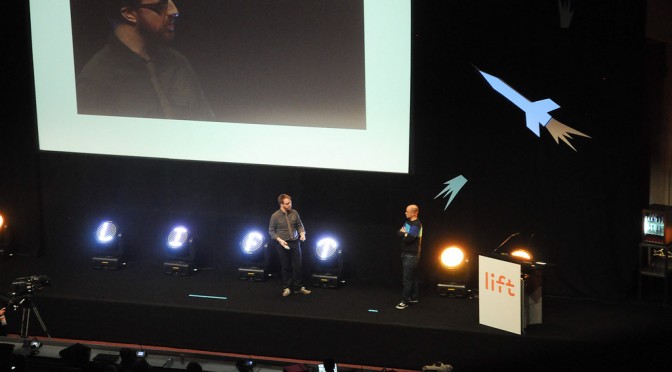 Over here in Geneva, the Laboratory was involved in the Lift 12 conference with various activities. Fabien attended the event and Nicolas is part of the editorial team and, as such, he took care of one third of the keynotes presentations with sessions about games, stories, mobile and near futures. He also organized three workshops, one about networked data (with Interactive Things), one about location-based games (with Mathieu Castelli) and another one about foresight methodologies (with Justin Pickard and Anab Jain from Superflux). The week was therefore very active and it was a great event overall. Lots of encounters with good people, new ideas and existing memes (it’s now time to digest all of those).

Saturday was then devoted to a sort of pilgrimage at CERN with Lift12 speakers. Well, here in Los Angeles we mostly were working on, oh — let’s call it Marshall Stack. It’s a Project. It’s another project along with Ear Freshener that belongs to the Project Audio Suite. It was some very pragmatic, tactical bits of work that we were doing which meant corralling the team, especially the instrumental implementors — the engineers. It also meant writing up a UX specification but doing it in a non-tedious but very clear way. No boxes and arrows. It’s narrative. It’s more a story than flow chart, which I like. My hope is that it engages people in a way that a story does, rather than making people’s eyeballs glaze over and close as a flow chart or wireframe potentially can do. There was some good, very promising engagement with the technology team who come across as confident and certainly capable. But there’s always that nagging concern that comes from a twinge of engineers’ over-confidence. When idioms like “we can just smash this”, “correct me if i’m wrong — but this smells like just a weekend project” — a little bell goes off in my head that is a mix of “great! this’ll go smooth” and “hold on..but *how and which weekend are we going to smash it?”

Part of the job of creative lead in this case is, I think, to run ahead of that end of things as, at this point — it’s the known unknown. Meaning — there isn’t certainty as to how to implement this although it is definitely possible — we’re not trying to get to Mars or make a cold fusion reactor in a mayonnaise jar. This is entirely doable. It’s now time (4 weeks), enthusiasm and motivation and quite a bit of good, engaging story telling that will put a lovely frame around the experience.

I’m doing some detailed logging of the evolution of Marshall Stack because I think there are some good procedural lessons in the project. The bump and shove of a project and where things get lost and where new things get found. The evolution of things from initial aspiration to a sudden simplification; how different aspects of a project get culled in the interests of expediency. Ways of communicating and sharing and discovering new facets of a concept. Etc. We’ll see. It’ll make for a good postmortem narrative, or whatever you’d call it.