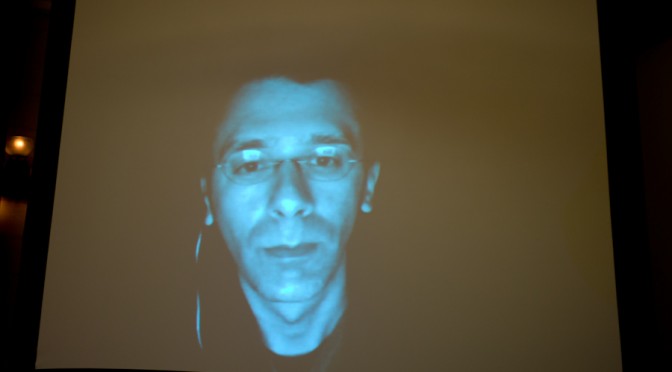 All Nicolas has time to say is, “A quick trip to Montpellier for a workshop about locative media.” Well..maybe he’ll add more when he lands in Geneva, immediately goes to teach a class and then (tries) to get on our monthly Design Fiction teleco.

So, in the meantime, Julian will fill in:

From Austin Texas, Nicolas and Julian put together a panel for SxSW called “Mind and Consciousness as User Interface” for the interactive component of the event. What we wanted to do was show the cultural and technical trajectory and pre-history of this idea that we can control aspects of the world with our mind. But we wanted to share more than just contemporary ideas around this and definitely more than just the technology. Rather, there was an emphasis on the agelessness of this diea that one can exert one’s will to effect the world through thought. From the spiritual, to things like Reiki and Jedi Mind Tricks and global consciousness movements and human potential movements and the emphasis on the hubris of this — that *my thoughts and will can make the world change — this is a very human and somewhat desperate aspiration that we have. We did not want to under emphasize this important cultural and historial element of all the weird monkey-controls-robot-arm experiments. These are subsets of a rather troubling desire to control things. So — there’s that. And besides, Nicolas showed some fantastic imagery of brains with wires, while Julian recounted the cultural record of these things through some important science fiction films such as Brainstorm, Star Wars (“..these are not the droids you are looking for..” & “release him Vader!”), Surrogates and Black Mirror.

Scientific American had a nice little write up about the brain control panel.

Julian was in Los Angeles for a few days last week after the fun Design Fiction event in Tempe. But, while in Los Angeles, there was continuing work — ranging from slight panic, to great triumph — for the Project Audio design effort I’m calling Marshall Stack. Hardware is meant to be done by the end of *this week, which is fantastic considering its a six week project and the hardware guys started basically two weeks ago. Once we get the hardware in hand in the model shop — that’ll be a tiny little ARM-based board with a number of wires dangling off of it leading to switches and antenna — there’ll be much hand work to CNC the compliment to that hardware as proper industrial design. That’ll take another two weeks, I reckon. Handwork and all..

That photo? That’s the Slavinator/Slavinbot/Slavin Head used by the New Aesthetic panel to represent Slavin..who was not in attendane but meant to be. It was weird. And so was the panel, in a weird, super-awesome, lovely-to-see-and-think-about-things-this-way sort of way. It was an *awesome anecdote to the otherwise rough, only-partially-inspiring, over-whelming, too-many-people-trying-to-give-me-free-beer-to-pitch-their-wares kind of experience. This’ll be the last time for quite some time, I suspect. I may focus on smaller, lightly curated gatherings rather than the #everyone-come-and-do-stoopid-stuff-they-think-is-creative-like-have-homeless-people-wifi-hotspots-as-if-that-could-ever-be-a-good-idea.