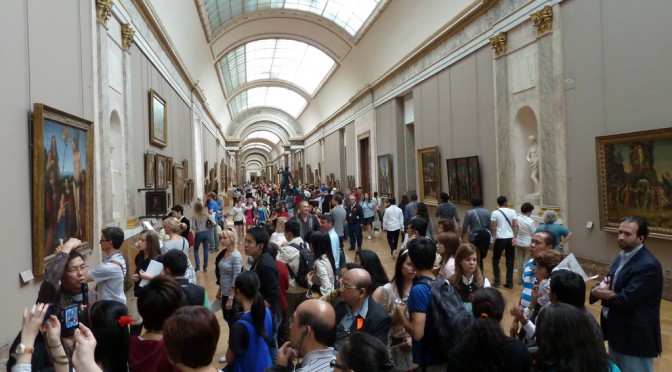 Here in Barcelona, we continue fine tuning Quadrigram, with now a meticulous work on the coherence of pre-programmed modules the tool will provide to access, manipulate and visualize data flows. It also means some backstage cleaning and improvements of the engine that supports the visual programming language.

We have also been busy joining forces with our new friends at the user experience & data visualization studio Interactive Things. They have been mandated to produce visualization mobile phone network traffic and we do our best to provide the cleanest and more meaningful pieces of data. Their magic will be presented at Lift 12.

In the meantime, Yuji Yoshimura traveled to Helsingborg, Sweden to present at ENTER2012 a study of the visiting experiences at the Louvre Museum. His paper New tools for studying visitor behaviors in museums: a case study at the Louvre is the result of a collaboration between Universitat Pompeu Fabra, MIT SENSEable City Lab and us. It builds on the data we collected in 2010 to measure hyper-congestion phenomena in the busiest areas of the Louvre.

In Geneva, the week was focused on various projects. It was the last week of teaching at HEAD-Geneva this semester. Last Monday, I gave a course about innovation and usages and another one about design ethnography (which was actually made of students presentation). Tuesday was devoted to meetings in Saint Etienne (France) at Cité du Design, a quite big Design Center located in an old and beautiful manufacture. Then I (Nicolas) gave a presentation there about human-robots interaction (slides are on Slideshare). The rest of the week was spent in meetings with Lift speakers, students (time to discuss their masters thesis!) and watching video material for the current field study about head-mounted displays. The end of this project is pretty soon and we are currently working on the final presentation for the client.

In Los Angeles, Julian was a busy-bee trying to get PCB’s fabricated for the Ear Freshener’s . Technically — no problem. But..we had to find a new manufacturing service because our usual guy, Gold Phoenix is on break for the Chinese New Year. We ended up trying AP Circuits, which perhaps is a bit better for B1 Functional Prototypes insofar as I can get 2 boards done for about $40, including shipping.

At the same time, we decided to try making solder stencils for the first time to see how much that speeds up populating and soldering the boards. I don’t know why it’s taken so long to try them, but our friend Nathan Seidle at Sparkfun put us up to it. We started specifying some machines for the machine shop in this category of things — an automatic pick-and-place machine and a reflow oven with a conveyor belt and a bulked-up MSO/DSO for mixed analog/digital signal analysis.

Okay, less techie stuff. A Near Future Laboratory Design Fiction workshop is coming up. Nick Foster has just joined the Laboratory. Hello, fosta! He and I will be conducting a workshop on Design Fiction at the Emerge event at Arizona State University March 2nd and 3rd, I think it is.

So — we’ve been doing some preparation for that with the theme being — what would you find in a crappy liquor/convenience/kiosk store in the Near Future..say 2015? And we’ll make some tiny about it to help communicate some principles we’re experimenting with about anticipating the future. The over-arching theme is that the future is actually quite mundane when you get there. And as our friend Rhys Newman has observed quite incisively — it may be the case that the evolutionary trajectory of all amazing, world-changing technologies is the counter of places like 7-11 and gas station counters. (More on that soon.)