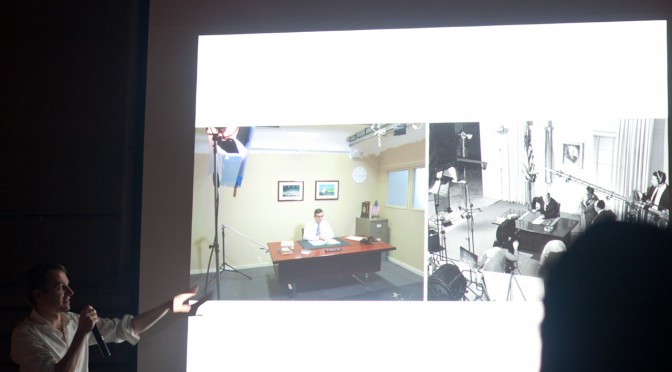 Just a thought and a note which is not an edict — just to say that Design Fiction can work as a way to have a thorough, sensible story that represents what could be. Yes, certainly it can. I’d argue that the work represented above called The Golden Institute and this other work called Super California: Forever Future by Sascha Pohflepp use Design Fiction to play around with what could have been and what could be in lovely, seductive visual narratives. Along with them go some fantastic exemplars and artefacts of those designed fictions. Those things — the artefacts and the films — are the design fiction itself. It’s more than the visual story, but the thoroughness of the stories with the artefacts that make them compelling and engaging. The films alone are great — but the projects come together in the coupling of the material with the visual documents.

There is a fine line between speculation in a way that throws things a bit off their track — gives some new, unexpected, perhaps illogical food for thought on a topic. The Golden Institute assumes that President Jimmy Carter’s ambitions for a comprehensive energy plan for the United States came to fruition. In the visual narrative we are given a documentary style government/corporate video of the plan and its possible outcomes. The objects help tell the story. Forever Future follows a rocket scientist as he explains how the hopes and ambitions for a future were not able to come about. He laments the failed ambitions but tirelessly archives new plans and new ambitions for future space programs — both those that succeed and those that feel.

The future when it arrives is more often than not as annoying, mentally stressful, mundane, boring and *blah as the present is. There’s lots to marvel about the today, about the present. But as much to ruefully shake one’s head about or decide — okay, this isn’t the future the zealous future pundits and moonbase architects said we’d get.

Okay. That may just be *me, but I prefer to think about what I consider truly novel, unexpected things rather than the same thing only done with a different brand on an existing object. That goes for failures as much as things that come to fruition, but often times in a different-than-expected form. Jet Packs exist — they’re just not commonplace or cheap or even safe. Doing Design Fiction is just as much about isolating unexpected outcomes — for example, the inevitable porn that will sustain any augmented reality future..it certainly won’t be mapping applications and city tours as the current augmented reality planners suspect to be that technology future’s economic lifeblood.

Doing Design Fiction as the normal, boring possibilities that are basically just visual narratives about the boring aspects of a new, provocative idea misses the grit and grime and disappointments and banality of most futures. That in my mind is closer to just doing traditional design — same stuff, different client; same stuff, only on the iPad instead of just the Web; same stuff, only with a different UI modality. Etc.

There are good reasons to use little films plus some motion graphics and, like..Mocha or SynthEyes or your favorite prosumer special effects package to make something look like it belongs in the scene and all that. I *get that. But in the case of doing normal design work, those little films are best suited to contributing to the refinement and iteration and exploration of a design project. It’s a perhaps more thorough way of figuring out how a UI should work because you have to go through the trouble of making a more resolved version than you might with static wireframes. That’s all. But, in this case — with due respect to what I am sure are fine, thoughtful, creative folks at Hotstudios — that ain’t Design Fiction in my book. That’s just good Design Prototyping with a little film.

2 thoughts on “Just A Note: Design Fiction Is Not Design You'd Do Anyway + Motion Graphics”