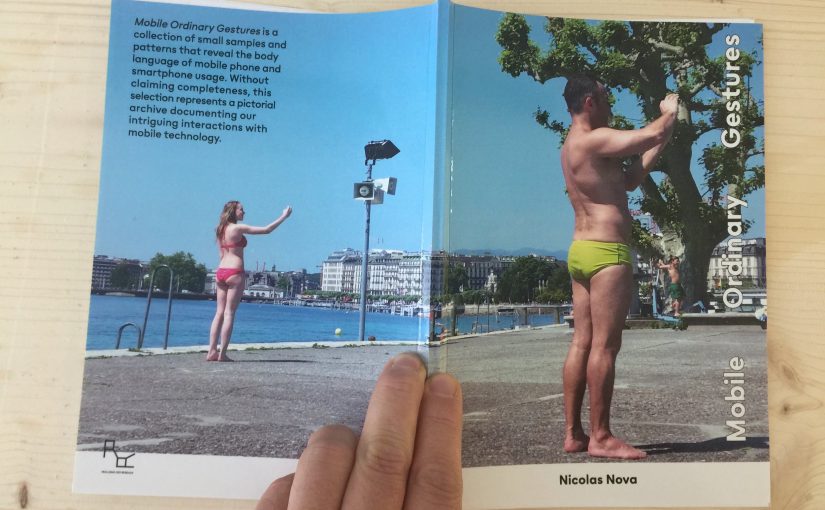 Do these selfies taken by two people who don’t know each other give us a glimpse of the future? Will the ever-increasing use of technological devices reconfigure our bodies? Will it affect our posture even in the most banal situations?

Those are some of the questions we asked in Mobile Ordinary Gestures, a booklet that describes a typology of gestures and postures adopted when using smartphones. Without claiming completeness, this selection represents a pictorial archive documenting people intriguing interactions with mobile technology.

Similar to Curious Rituals, we use this type of visual ethnography as signals of change of the present from which to extrapolate when designing futures. The documentation of this current body language can also inform the adaptation of current interfaces, or the creation of products that can support, help or benefit from the gestures and rituals we found.

Get a free digital PDF from our shop, or purchase a normal, human, non-streaming, non-downloading, non-data-using media “hardcopy” through Lulu.com

Régine wrote a nice blogpost about our book "Dadabot". It's hard to find (one-line order is available here) but the main essay is available under a creative common license here as a PDF file.

Why do I blog this? because it's a lovely type of poetry.

Joël Vacheron and I recently published a book about the role of software/bots in cultural production, and the hybridization of cultural forms (music, visual arts, literature) produced by digital technologies.

It’s called “DADABOT An Introduction to Machinic Creolization” and it deals with Twitter bots, generative music, software-based literature, and all those weird art/design experiments with digital hybridization and mash-ups. The book is made up of an essay, experiments with mechanical turks, interviews with Florian Hecker, Holly Herndon, Constant Dullaart, NORM, Silvio Lorusso, Matthew Plummer-Fernandez, an essay by Maxime Guyon, as well as a lexicon of the terminology used by these practitioners.

Designed by Raphael Verona, it's published by ID Pure, and it can be ordered directly from their on-line shop. Some spread below: (a) Mahma Kan Althaman, Whatever the Price by Khalid Al Gharaballi and Fatima Al Qadiri (written in arabix, see more in this Frieze article), (b) a lexicon as well as intriguing list of programming languages, (c) an experiment in which I crowdsourced the description of glitched images to "mechanical turks". This is a new book I just released with my colleagues Lysianne Léchot-Hirt (HEAD–Genève) and Fabienne Kilchör / Sebastien Fasel (Emphase.ch). It's the result of a research project we conducted in 2013-2014 on how designers repurposed ethnography to their own needs and perspective. We basically conducted a series of interviews and observation session with designers to describe the approaches we encountered. "What do designers mean when they say they’re going to do “ethnography” and “field research”? What are the relationships between observing people and designing products or services? Is there such a thing as a “designerly” way of knowing people? This book is a report from a research project conducted at HEAD – Genève that addressed the role of people-knowing in interaction/media design. It describes the wide breadth of approaches used by designers to frame their work, get inspiration or speculate about plausible futures. This book presents practitioners’ tactics and illustrates them with several cases. Unlike many resources on user-centered design, it takes a broader approach to design by considering cases in which design is not only a problem-solving activity, but a tool to speculate about the near future, reformulate problems or propose a critical discourse on society. In doing so, this book helps designers, students and consultants to challenge their own perceptions and update their approaches."

It can be purchased online here at we-make.it Few weeks ago, Joel recommended me the work of Stephen Willats, and more specifically this book called "Between Buildings and People". I found it this week in my mailbox  (I've bought a second-hand copy that the owner may have read in his bathtub, hence the concave look on the pics).

Based on a series of interviews, observations and photographic documentation, Willats examines the relationship between people and the built environment. His purpose was to investigate the influence of modernist architecture on people and how it's expressed materially. Although this goal is a tad deterministic for my taste, I find the result fascinating and inspiring. The most interesting bit IMO lays in the ways Willats present the material he produced. See for instance the use of pictures along with interviews, or the diagrams he draw on photographic depictions of the environment: "Living with practical realities" (1978) is another example of Willat's work that I enjoyed as well:

"Living with Practical Realities was made with an elderly woman who lived on her own in a tower block in Hayes, West London. The work centres on the isolation of the elderly symbolised, physically and socially, by the tower block. This is one of the early works in which Willats used the actual content of audio recordings and his photographic documentations that had been made with the co-operation of the woman, directly within the work" Living with Practical Realities (Panel One)

Why do I blog this? I'm currently working on a follow-up to the Curious Rituals project. My goal is to investigate people's relationship and use of smartphones (with a focus on gestures). Willat's work is highly inspiring both as a research protocol and as a way to present research results in ethnographic research. The descriptive potential of this work is really interesting. Perhaps it's because of his artist background that I find this more advanced than what I usually see in visual sociology – it might appear non-academic from this POV as Willats do not necessarily follow all the "rules" but it's certainly stimulating.

For instance, I find the image diagrams clearly relevant and insightful. I haven't read the whole book so I'm not sure about the underlying methodology here, but it's compelling. It reminds me another example of design analysis that I find interesting: the use of photomontage and overlay annotation described by Dan Hill for a workshop he did back in 2009:

"last week I tried a technique with them that I've often used myself. Writing on photographs of an average street scene, we asked students to imagine all the data that could be derived from the scene via sensors (in the broadest sense of the word), and then go on to sketch interventions or hacks into those scenes, drawn from such data sources."

While Willat's approach is descriptive, Hill's proposal is projective (it's a design workshop) but both revolves around the idea of annotating images; which I find inspiring an relevant to my own research.

For those who asked, here's the list of the tracks I've included in the 8-bit reggae book. Definitely not exhaustive but a good list of tunes that inspired me. Of course there's not just chip music as the book started with the evolution of reggae.

Last week, I was in the Bay Area for a series of events about the future of the book. On Oct 23, I spoke at "Creating Minds" at UC Berkeley, along with James Bridle, François Bon, Bernard Stiegler, Warren Sack or Kathryn Hayles. Here are the slides of my speech, which basically dealt with the new forms of creolization (cultural hybridization) enabled by algorithmic culture, and its consequences for textual production:

Curious Rituals is a project about gestures, postures and rituals people adopt when using digital technologies. It’s both a book documenting gestures we observed, and a design fiction film that speculates about their evolution

Curious Rituals was a research project conducted at Art Center College of Design (Pasadena) in July-August 2012 by Nicolas Nova (The Near Future Laboratory / HEAD-Genève), Katherine Miyake, Nancy Kwon and Walton Chiu from the media design program.

The project was about gestures, postures and digital rituals that typically emerged with the use of digital technologies (computers, mobile phones, sensors, robots, etc.): gestures such as recalibrating your smartphone doing an horizontal 8 sign with your hand, the swiping of wallet with RFID cards in public transports, etc. These practices can be seen as the results of a co-construction between technical/physical constraints, contextual variables, designers intents and people’s understanding. We can see them as an intriguing focus of interest to envision the future of material culture.

The aim of the project was to envision the future of gestures and rituals based on:

“Curious Rituals” was produced as part of a research residency in the Media Design Program at Art Center College of Design in Pasadena, California. What are we to make of all these countless sounds and images passing before our eyes, reaching our ears, arriving on our cell phones, moving across our computers and iPads? What artistic categories are relevant in an era of ever-increasing access to production equipment and DIY art? Indeed, how does art fit into social networks. […] This book is a contribution to the field of Digital Humanities. It takes the form of a query guide cognizant of the redistribution and dissemination of knowledge via search engines and collective encyclopedias. It facilitates research by providing primary sources based on keywords supplied by artists and scholars of various generations, made meaningful by the contributors’ own experience