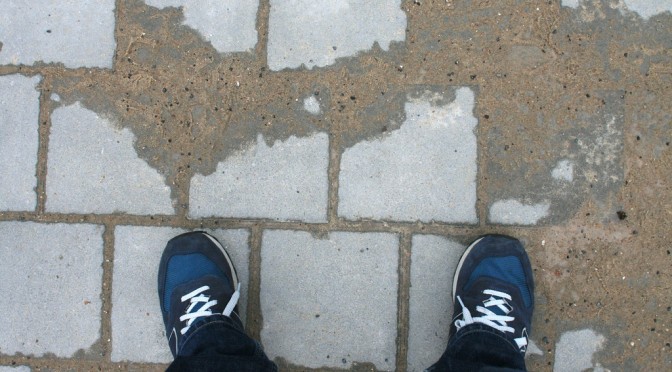 Nicolas: A quite academic week with two days as an expert in a design school in Switzerland (Neuchatel) and polishing a research project submitted to a funding body. Being external jury judging student’s work is always intriguing, especially when projects are very diverse. In this case, it ranged from a new generation of mouses to kite-surf devices and mountain bikes parts. Industrial design is fascinating because of the whole range of constraints that have to be taken into consideration: physical, cognitive, social, political, etc. Commenting on the projects, I realize how hard it was to play with all these parameters and , at the same time, create something new and meaningful.

Julian: Quite a busy programming-the-computer-at-night week. Yes. Programming it to make it do things. I have a hunch of an idea for a thing that wouldn’t make my life easier? But would make it more fiddily. Based on an observation: most social network services require that you go to the service to find out what your peoples are up to // have shared // took a photo of // checked-into // &c ad infinitum. What about going to the people first? An Internet of Me & Mine rather than an Internet of Things or an Internet of Services. You know? As if all my friends had a stats card like a 1970s era baseball player. Or something. Like — shouldn’t your people be the point of entry for these things in a very bold, upfront fashion? And you get to pick who you browse rather than seeing *everyone/thing as if you could sift through it all? Maybe you have to pick some small number of true-blue friends — or the algorithm enforces true-blueness by making sure the relationship is two-way. You know? So — ObjectiveC land for me last week/weekend/nights-til-late.

Oh — also? The Marshall Stack speaker project came to a happy point of a milestone with a very good share and a lovely looking thing. Thanks to Simon and Vids for their hard-making-things work. That’s Simon up there. He’s not a grumpy fella, but sometimes I ask him to do a lot. He also had a new little one the other day! Congratulations Simon! Take the rest of the week off. 😉 A vertical style urinal in a private bathroom. Curious introduction of a fixture normally found in a public “men’s room.” Made me think about the incongruity introduced between public and private space and the meaning of things when the thing moves into other contexts. Found in a home in Venice Beach, California.

A private bathroom, introducing an element of the public with this urinal. Quite an incongruity, if you ask me.

Why do I blog this? A curious artefact, the urinal. It is quite ordinary in one setting but clearly out of place (at least in my mind) in the setting of a private, residential bathroom. It’s almost like a prank or something. I have no idea why it is here, but there it is.

What struck me most is the public ritual that is inferred by this fixture.  You know what I mean. It’s a common ritual, everyone does it. Men do it in a particular fashion distinct from women, but nonetheless, it gets done. The full-length, stand-up urinal switches the context though. It does not seem to make sense in a private setting. It may in fact be more efficient (it’s hard not to be cheeky here), but it interrupts the sense of what this room actually is when found in a private home. A confusing placement of toilets. The angles of the two urinal fixtures makes for an awkward bit of maneuvering and probably several moments of immodesty. Seen in Madrid, Spain. Neat. Orderly. Clean. Considered. Urinals in Japan, with a comfortable spacing between stations, although no modesty wall. Tokyo, Japan.

It makes me think quite clearly about the appropriateness of “the object” (in general terms, not just a toilet) and how much more “things” surpass their mere engineered utility. Things in themselves are not their function, which is obvious to me as a principle of design. In the most crass sense, things become styled to elevate or inflect their meaning to people. Urinals become horizontal troughs in some settings, which is closer to a refined sort of piss-pot for farm animals, which some men become when heavy-footed and heavy-lidded with drink. The horizontal piss trough means something distinctly different from the vertical urinal, and that again from the vertical with a modesty wall, and that again from the private stall. but so much more when exhibited in a bizarre incongruity. For example, telephones, or mobile phones, lets say, that do more then one would expect a phone to do and all of the effort that goes into inserting a new bit of functionality for the sake of the functionality. Consistent with their intent and the context of their intent, designed objects “work”. There are lines that can be easily crossed. That line is all about context and social rituals, not the sort of sense in which a very instrumentally-minded person might say — well, it serves a basic purpose, so what’s the problem?

The conclusion for design is that one, as a maker of things must think carefully not only about the technical, instrumental bits, but also the normal, humans (who are more than likely not like you, particularly if you are an engineer) who will introduce this thing into their more everyday, quotidian settings. (I am thinking here mostly of the thing that is on my mind quite a bit — communications devices that end up being more like something an astronaut would use than what a normal, everyday person would introduce into their everyday practices of connecting to other people.) In this example of the toilet, it is clear that it is more than a instrument for flushing waste appropriately. This example will certainly do that, but design is also about context, and contexts of use and consideration of the setting in which such action happens. This bathroom becomes something else (closer to a public restroom? more crass? more suggestive of these other places, etc.) with this thing in it, for sure.
END_OF_DOCUMENT_TOKEN_TO_BE_REPLACED Expectation or anticipation? In Batvik Finland?

An interesting article in the Harvard Business Review that I came across recently. It is relevant to a long-standing interest in other strategies for “innovation” particularly in commercial enterprises.

The article is called “Fewer Engineers, More Anthropologists” by Navi Radjou. It argues for, like…more anthropologists and fewer engineers while an enterprise attempts to “effectively identify[ing] and address[ing] the explicit and unmet needs of the broader consumer base in emerging markets.” (Quick translation — selling more stuff that makes sense to local people/cultures/practices in Brazil, India, South America and probably Africa, too.)

Why I find this intriguing is how ancient it sounds. If it the article was dated in 1990 I might understand. But it is quite recent, published only this month. This makes me think that something was forgotten, as is the nature of history. This is fine, except along with what was forgotten goes any lessons or insights learned.
END_OF_DOCUMENT_TOKEN_TO_BE_REPLACED Curious strategy for preventing bumper dings — a bumper for the bumper, you might say. It’s the Mobile De-fender. (Get it? De Fender?) You will see material like this for preventing a lower category of bump, such as a “light tap” from negotiating a tricky parallel parking job, or even the deliberate tap to inch a car up a bit to fit better in the spot. As I was the victim of an a**hole who just steady backed up way more then he had to, willfully unaware that we were behind him, lights on and about 5 meters clear of him, steaming his ridiculous enormous 80’s Cadillac while we were waiting for him to vacate his spot, probably tipsy from a pitcher of beer at the Pizzaria we were going for family dinner, I can empathize with the necessity of additional rubberized armaments to prevent these kinds of minor dings. Fortunately, there was no noticeable damage — I think bumpers are pretty well designed these days to take a 3-5 mile per hour kiss.

Related somehow is this cobbler seen in Chinatown in New York City, working on fixing some woman’s busted heel or something. How is it related to the rubber bumper bumper? I noticed his materials — recycled rubber from a full tire (on the left, along the wall running into the frame) and a scrap of rubber from a tire on the right bottom. A resourceful, resource-reusing cobbler here. Bravo, I guess.

Why do I blog this? Observations of curious human improvisational practices for preventing abuse and renewing the use of their various mobile artifacts.
END_OF_DOCUMENT_TOKEN_TO_BE_REPLACED A hand-painted sign marking this restaurant/bar, curious reversed. I puzzled over this — it seemed not particularly in keeping with the generally sensible and utilitarian graphic design of most everything else in San Miguel de Allende. This seemed to have a peculiar sensibility that serves no specific purpose other than to be different and noticeable for being odd.

My best guess for this is that the streets that run left/right in this orientation are steep side streets and not heavily trafficked. The streets running into/out-of the frame are roughly level and would fit more into my category of “main drags.” This restaurant is right at the corner, but the entrance is on the side street. The street that runs perpendicular to this entrance is a one-way, with trafficking flowing away from the entrance. You would not see the restaurant entrance or the sign as you trundle in your Volkswagon or pick-up truck..unless you caught it in your rear-view mirror as you drove away. In this case, the sign is exceptionally utilitarian and sensible.
END_OF_DOCUMENT_TOKEN_TO_BE_REPLACED Seen in San Miguel de Allende, a re-routed, altered infrastructures adapted to more convenient, local activities. They are, according to one commentor here, "Diablitos" — little devils. In portugal they are "gato," according to Younghee. Both are idioms for illegally drawn electric cables. Here an overhead mains line is retrofitted with a conventional North American plug to accommodate..? This could easily be a private and perhaps illegal improvisation by an enterprising citizen or perhaps a sanctioned retrofit for temporary access to power by local authorities.
END_OF_DOCUMENT_TOKEN_TO_BE_REPLACED A cordon of "road turtes" repositioned to define an area for a vendor’s cart of refreshing fruit cups. The road turtles stake out an informal, semi-permanent "home" for the vendor’s cart, but closer to permanent in that they’re nailed into the softer material between the broad cobblestones that make up the street. I found this practice in a couple of instances. Semi-permanence in a bustling context where finding a place to conduct business probably requires some sort of territorial negotiation, including making material adjustments/improvements to public space.

END_OF_DOCUMENT_TOKEN_TO_BE_REPLACED A variety of curious improvisatory object holders found within unexpected and retrofitted interstices.